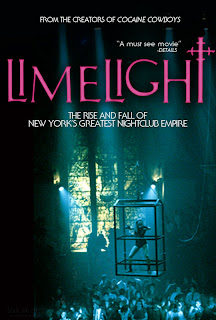 [LIMELIGHT is now available on home video.]
Review by Charles Cassady, Jr.
My wife knows just about all the "Saturday Night Live" running characters and their catchphrases. I wish this were a marketable skill. There does exist, in fact, a "Saturday Night Live" board game, thank you Lorne Michaels (or is he now "Lorne Michaels (TM)"?), and it is possible that some high rollers might play it for money...somewhere. But at the moment it's just her preoccupation. And one SNL running character she quotes is `Stefan,' the effete NYC club-kid shown on the Weekend Update segment. Surely you know this one? His schtick is to come on and advise visiting tourists on Manhattan night life, always with the same routine: "For the ultimate New York experience, look no further. The hottest club in New York is (unpronounceable). The brainchild of performance-artist and prostitute (unpronounceable), this former haunted mortuary reopened as a retro-future-contemporary-punk-hip-hop-redneck-country-line-dance-nonalcoholic speakeasy and opium den. Look! Who's that in the corner, Kate Moss? No, just a chalk-body outline..." And so on.


If there were to be a "Stefan: The Movie" (and don't think for a minute Lorne Michaels hasn't considered it, just as soon as the writers come up with a second joke for the character), it might take a cue or two from Magnolia Releasing's documentary feature LIMELIGHT. No relation to the Charlie Chaplin dramedy of the same title, LIMELIGHT offers a bubbly cocktail of NYC pop-nostalgia - maybe augmented with the oft-repeated dictum that the Big Apple is a fun place to visit but you wouldn't want to etc. etc.
Hero of the piece is Canadian entrepreneur Peter Gatien. He started his first businesses on seed money raised via the insurance payout from the youthful loss of his eye in a hockey game. His ventures took him south to the United States, where he opened a number of successful nightspots. Finally he wound up in New York, New York where he unveiled his most ambitious venue - the Limelight, a disco in a former Episcopal church. The Limelight (and a side project, an underground thing called the Tunnel) became the place to see/be seen/hook up for straights and gays alike in the 1980s.
What looks like a fizzy cocktail of recent NYC pop-nostalgia morphs into a gripping true-crime courtroom case and its aftermath. As AIDS, then ecstasy and other narcotics trends hit the Big Apple party scene, spreading their peculiar mix of decadence among the hedonists, New York's police and government prosecutors were getting high on their own militancy derived from cleaning up the streets during the crack-cocaine nightmare. Even filthy Times Square became Disneyfied and family-friendly under top-cop Rudolph Giuliani and his lieutenants.
But drugs persisted on the club scene (there were, of course, Not Ready for Prime Time Players, SNL hosts and musical guests in town every week). City Hall  targeted Gatien and the Limelight, determined to make the slightly sinister-looking, eyepatched mogul into a public example (a la the government's bringing down Al Capone in the 1930s) of what happens when managers tolerate drugs. He was dragged into court by a high-profile dream-team of anti-narcotics attorneys.
At this point one should print the disclaimer that the producer of the documentary is Gatien's own adult daughter Jen, an established filmmaker. She has claimed she was practically locked out of the editing room by director Billy Corben, but it's still a given this would take Gatien's side. That said, it's a pretty convincing argument that the guy was scapegoated, a point made by the movie's team of character witnesses including Village Voice reporter and author Frank Owen and, most of all, Gatien's high-flying defense lawyer Benjamin Brafman. If I'm ever in trouble - say for murdering my wife for her endless quoting "Saturday Night Live" characters at me - phone Brafman to get me off. No, don't; I couldn't afford him, and it would be an open-and-shut case of self-defense anyhow.
Brafman here says the charges laid against Gatien were like management of Grand Central Station or Madison Square Garden being found responsible for every illicit substance found on their properties. Initial whispers that Gatien profited off drug sales condoned on his premises were nonsense; he says he was doing fine with legitimate business and would never jeopardize it with the relative paltry amounts he might have made running his own coke operation.
The Gatien case fell apart with a trio of "scumbag" key informants, some of whom  eventually turned on their own government handlers with bizarre and paranoid charges. Viewers might even remember one, club-kid Michael Alig, from the movie and documentary PARTY MONSTER; in 1996 he murdered and dismembered drug-dealer associate Angel Melendez (it became known as the "Drano murder,' since the household cleaner was just one of the weapons involved), becoming somewhat problematic as a star witness.
Even so, authorities and now-Mayor Rudolph Giuliani (who refused to be interviewed and gets an uproarious "dis" in the closing credits) continued a vendetta-obsession with "getting" Gatien, a fact bemoaned by interviewee Ed Koch in particularly piquant fashion. One may or may not buy into the proposal - advanced chiefly by musician and Limelight regular Moby - that the Limelight and the Tunnel were cultural treasures and incubators of the arts. But the redeeming-social-value sad theme here is a reversal of the American dream, wherein a self-made immigrant success story gets torn down by vindictive, prejudiced authorities. All in the most supposedly enlightened metropolis in the world.
It's an even scarier thought considering that Giuliani, right off his hero-of-9/11 cachet, was briefly a serious contender for the White House.
Noblesse oblige I mention that the New York Times’ movie critic especially disliked this movie, and I should respect that she probably knows more about New York City than I do (or at least suck up to her parent company; I might want to try writing for them someday). A main
complaint, apart from an abundance of Gatien gossip left offscreen (especially the multiple divorces) is overuse of Adobe AfterEffects filters, a mind-altering substance to which most documentarians are now hopelessly addicted. Well what do you want, Ms. Lois Lane, documentarians who overdo the visual stimuli to get arrested? Come to think of it, to judge from this portrayal, the Giuliani City Hall might just have moved onto that as the next order of business.
As a footnote, the narrative claims that with Gatien’s fall so ended anything that was worthwhile about the New York night life scene, which may go to show that while many a truth may be spoken in jest, it’s not always accurate to base one's view of the world by the word of a "Saturday Night Live" running character. Good night, and have a pleasant tomorrow. (3 out of 4 stars)
Posted by Charles Cassady Jr. at 12:01 AM