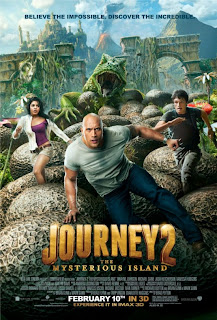 JOURNEY 2: THE MYSTERIOUS ISLAND is genetically engineered to screen amid an adrenal, pre-pubescent haze of pizza belches and the bright, drifting spore from exploded Pixie Stix. Outright panning this film would be like kicking a puppy - despite its exhaustive, destinationless energy, the thing is relentlessly positive and completely helpless to defend itself. With alternating scenes of action and comedy that twitch out in 5-minute bursts before spazzing along to the next lizard attack or joke about The Rock's gift for (admittedly hypnotizing) pectoral aerobics, the movie knows that, for its key demo, the theater is merely a pit stop between a Mountain Dew binge and the next Call of Duty firefight.

That said, it's pretty fun. Of course it doesn't come close to realizing the sharply imagined and deftly crafted science fiction of Jules Verne, the object of its narrative obsession, but the fifth grade fantasists of America's literary future will find more than enough to enthusiastically recount to a rapt audience of recess buddies.


JOURNEY 2 carries on 2008's JOURNEY TO THE CENTER OF THE EARTH's conceit that Verne's supposed fiction was, in fact, you know, fact, its tantalizing vehicles and locales awaiting discovery by self-declared Verneans who obsess over clues hidden in the author's books. Sean Anderson, (Josh Hutcherson - the only returning actor from the original) has become fixated on the Mysterious Island, from which he believes his estranged grandfather (Michael Caine) is sending cryptic satellite transmissions. 15 minutes of half-cocked Da Vinci decoding later, Sean and his ex-Navy step dad, Hank (Dwayne Johnson), have assembled a map, flown to Polynesia, hired a money-famished helicopter pilot (Luis Guzmán) and his jailbait daughter (Vanessa Hudgens), and crash-landed on the titular rock. Cue Caine, Atlantis, and an imminent tectonic event that sends the crew on a frenzied cross-island escape mission.

It's easy to dismiss JOURNEY 2 as POV roller coaster footage dressed up for a dance. Even the hefty polarization provided by superfluous 3-D is helpless against a Candyland color palette that puts the HD in ADHD. Still, the movie seems so excited just to be a movie that I couldn't help but enjoy myself. Screenwriters Brian and Mark Gunn (MTV's 2ge+her) provide each character a simple emotional journey - all of them themed around family - that's fleshed out enough to justify both the character's and the psychological baggage's presence, but delivered concisely enough (through - and I mean this seriously - adept use of cliché and formula) to never impede the motion of the larger spider-crawling, rock-falling, ass-hauling inanity. Actually, the cardboard drama and spit-dumb fireworks display complement each other perfectly: Stepson dealing with stepfather, single dad dealing with daughter - these predictable binaries mean that the movie's high(est)falutin thought-meat is culled from the same gleeful link of the cinematic food chain as the gratuitous volcanic eruptions and man vs. giant eel one-on-ones.

If you're still reading this, I think I know what you're waiting for, and, Yes!, The Rock rides a giant bee. Okay, I mean, everyone rides giant bees, but Hudgens and Hutcherson, as the kids, are eye-catching non-starters; Luis Guzmán's character's interminable scaredy-cat shtick and low-ball physical comedy has pretty strict rugrat-only appeal; even Caine's performance is one of affable professionalism - he gives just enough of a fudge to smile and nod politely as a giant bird poo bombs Guzmán; but Dwayne Johnson? He practically makes the bee ride him. Supposedly, Johnson joined the project only after Brendan Fraser ran into scheduling issues. True or not, thank heck! For me, Fraser's bumbling everyman hero routine always bore the tangy sweat of desperation, like he was trying to clobber a bonus into his paycheck by sheer force of mug. The Rock, on the other hand, is effortlessly goofy and charming, exploiting his meat-hulk aspect for easy chuckles, but possessed of enough true wit to score honest-to-goodness laughter just one scene later.

Apparently, lots of folks at my screening of JOURNEY 2: THE MYSTERIOUS ISLAND got their passes from the Cleveland Museum of Natural History. I'm not kidding. Also, Richard Dawkins was there passing out bibles. Seriously, though. A museum. This movie is about as fast and dumb as they come, and while I may not ever think about the specifics again (unless I have to ride a giant bee over an active volcano, and I'm trying to figure out how to steer), it's definitely one of those idiotic films against which I'll judge all future idiotic films, in that it accomplishes exactly what it needs to - it punches a hole in the Lick-M-Aid Powder and surround sound armpit farts for long enough to delight a room full of kids under the auspices of pure cinematic adventure. And all without a single rapping animal. (2 1/2 out of 4 Stars)
Posted by Matt Finley at 12:01 AM