An interview with Kerry Prior, director of 'The Revenant'

[THE REVENANT screens Saturday February 11 th at 11:59 pm at the Cedar Lee Theatre. Writer/director/producer Kerry Prior will be at the screening to introduce the film.]
Interview by Bob Ignizio 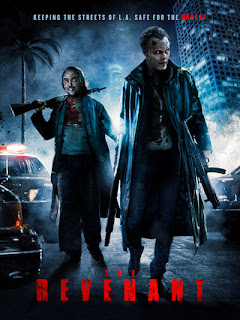 Independent filmmakers have long been the lifeblood of the horror genre, innovating, pushing boundaries, and just plain keeping it alive during dry spells when Hollywood didn't want anything to do with such disreputable films. Unfortunately, the market for seeing independent horror films theatrically has largely dried up. That's why it's always a cause for celebration to a horror fan like myself when one does get the chance to play on a big screen.
I particularly have to admire Kerry Prior for getting his debut film as a director, THE REVENANT, into theaters. As of this interview, his film doesn't have a U.S. distributor so he's doing it old-school, taking prints of the film across the country and booking theaters on his own. Just such a booking brings Kerry to Cleveland Heights this coming Saturday February 11 th when THE REVENANT has a special midnight showing at the Cedar Lee Theater. I had a chance to talk with Kerry ahead of the screening about the making of the film and his past as a Hollywood special effects technician on numerous films you've probably seen, including the NIGHTMARE ON ELM STREET series and James Cameron's THE ABYSS. Here's what he had to say.