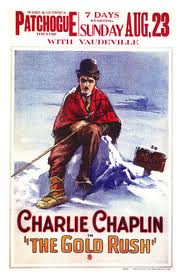 [THE GOLD RUSH screens Friday February 25th at 5:15 pm and February 26th at 2:50 pm at the Cleveland Cinematheque.]


What's there left to say about Charlie Chaplin's 1925 GOLD RUSH that hasn't been said? I a bit of digging and learned that Chaplin's direct inspiration for this comedy of hardship was reading about the horrific true-life Donner Party incident - a group of California-bound western settlers, snowed in for the winter of 1846, reduced to cannibalism to survive. You know what that means, right? Someday some film-school brat with a dorm shrine to George Romero and Herschell Gordon Lewis and the like will earn his ticket to Hollywood big leagues with a digital-era remake "Gold Rush - The Way Chaplin Intended," with full dismemberment, decapitations, eviscerations, nudity, anthrophagy etc. And the swooning Sundance jury (or San Diego Comic-Con, same thing) nerds who hand the splatter comedy their coveted midnite-screening slot won't even be savvy enough with film history to know the decent 1998 frontier horror flick RAVENOUS, with Guy Pearce, also drew from the Donner tragedy. Making it and THE GOLD RUSH kind of cousins, which is a weird thought.
So enjoy this one while it's still unsullied. Most best-feature-of-all-time lists include it and it enriched world cinema everlastingly with immortal imagery. NO NOT RAVENOUS YOU INTERNET IDIOTS! THE GOLD RUSH! Charlie's "Lone Prospector" character, pretty identical to Chaplin's emblematic Little Tramp (both quite...Chaplinesque, you might say), has a wistful, sentimental quality that makes his pratfalls, disappointments and victories as much human as humor. During the Yukon Gold Rush of the 1800s the nameless fortune-seeker, small, accident-prone and underprovisioned, is a contender among the roughneck maverick miners to strike it rich. In a remote, snowbound cabin he rooms with Big Jim (Mack Swain), a prospector who has discovered an entire mountain of gold ore. The Donner Party business comes up in a famous sequence in which the pair survive through a harsh winter with little food, Big Jim hallucinating the LP as a potential meal at one point. But with the hardship behind them they friends, Jim promising to share his fortune. Too bad something like that didn't happen with that Mark Zuckerberg and all those who worked with him to invent FaceBook.
But Jim, beaten by an outlaw, loses his memory. The Lone Prospector spends a lonely New Years in a frontier boomtown, mostly ignored by the populace, including a saloon-girl (Georgia Hale) with whom he's smitten. When Jim wanders into town and recognizes the Lone Prospector they embark together to return to the ramshackle cabin and the gold.
The fact that everyone is familiar with THE GOLD RUSH shouldn't tarnish any of its classic, iconic sequences: The "little fellow" not noticing he's being followed by a bear; the New Year's Eve dream in the hero entertains a group of beauties by making a pair of dinner rolls with forks stuck in them into adept dancing feet, etc. Amazing trivia: The "Dance of the Rolls" was actually a pre-existing slapstick bit, previously done on celluloid by famed silent comic Fatty Arbuckle. But Chaplin's rendition is the best remembered.
(And I don't believe the ill-fated Arbuckle ever sued Chaplin over it either. Instead Charlie got into legal trouble over his assorted underage girlfriends and affairs. These days nobody but the gossip and sex-tape-buying websites would care about the statutory-rape, while the attorneys would litigate endlessly over who owned "Dance of the Rolls" (TM) rights until the economy collapsed again. Welcome to show business.)
You have the opportunity to see THE GOLD RUSH in nice, restored 35mm  on the big screen. I remember first watching it in fuzzy B&W TV courtesy "Old Movie The Golden Era," a show on WVIZ back in the 1970s, the pre-ideastream days when the whole station worked out of a warehouse-like building on . It was hosted by a local gentleman named Stu Levin, who, in broadcast and occasional live appearances, screened silents and early talkies in their entirety and served as my avuncular childhood film professor and cinema-appreciation mentor. Yeah, he helped ruin my life, he did. Recently I found Mr. Levin in, of all things, a documentary on native Harlan Ellison. Turns out they're longtime friends, and Mr. Levin likewise moved out to the West Coast when he could take northeast no more. In the documentary he tells one of the most wryly wicked anti-Cleveland joke ever. And yet it’s LeBron James this community hates, not the other people who flee when they get a chance. And Mr. Levin, you helped make me a rejected movie nerd; least you could have done for amends was take me west with you. I would have behaved myself, mostly, and not have bothered Mr. Ellison with spec scripts all the time. He and I have a bad enough history as it is.
Anybody still reading? GOLD RUSH, good film. (4 out of 4 stars)
Posted by Charles Cassady Jr. at 12:00 AM