Flash Gordon (February 18 at midnight at the Capitol Theatre) 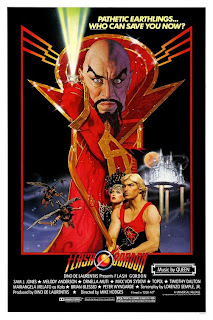 Premiering as it did in an era when merciless emperors of were copycatting STAR WARS in every way, Dino De Laurentiis-produced FLASH GORDON of 1980 remains daringly offbeat. To compete with the white-hot Skywalker saga every studio in la-la land dusted off every sci-fi product they owned the rights to, for computer-age remakes emphasizing gear-encrusted starships and cute little robots. Universal just happened to have the old Alex Raymond comic title in their deep pockets and this truly daffy retro-revival resulted. Though a box-office dud, it's gotten even better - depending on your definition of "better," anyway - over the years. I only rediscovered the sumptuous guilty pleasure on video, having, like so many others, ignored it in the theaters at the time. Mike Hodges' feature got mostly thumbs down from critics who Just Didn't Get It. At least there were no lousy sequels (ditto ADVENTURES OF BUCKAROO BANZAI: ACROSS THE EIGHTH DIMENSION, whose end credits literally promised a lousy sequel).
As with the European 1960s fantasias BARBARELLA and DANGER! DIABOLIK (also based on comic strips, incidentally), there's practically no attempt at realism As We Know It, Captain. Production designer Danilo Donati's techs and costumers, instead of taking their cues from Lucas or Spielberg or Roddenberry or any of the usual suspects, went right back to the source Alex Raymond comic strip and the fancy but relatively low-budget Universal Flash Gordon serial adaptations with Buster Crabbe to render what a period-correct Flash flick would look like - if the old-timey moviemakers had galactic budgets and color film. Recently SKY CAPTAIN AND THE WORLD OF TOMORROW kinda did the same deal (and also kinda flopped at the box office) but simulated the big stuff in entirely greenscreen-CGI. This is the real deal, not a pixel in sight, with extravagantly retro Arabian-Nights costumes, Oz-like creatures, crayon-box set designs and bathtub-toy model-miniature spaceships that actually trail sparklers behind them. Yes they do.
Flash Gordon (Sam Jones), a handsome football star for the New York Jets, is on a chartered plane caught in a meteor storm caused by an alien supervillain, Emperor Ming (Max Von Sydow) bullying planet Earth. No fooling, meanie Ming actually sits at a giant console out in space, tormenting Earth while pounding away merrily at buttons that say "METEOR STORM" and "HOT HAIL" (my favorite). The plane crashes near the lab of rogue NASA scientist Dr. Zarkov (Topol), ready to launch his homebuilt rocket ship to visit Ming's world/galaxy/nebula/whatever and beg for terms. Flash and his pretty agent Dale Arden (Melody Anderson) wind up on Zarkov's rocket for the voyage to Ming's world Mongo, which is surrounded by low-atmosphere moons, each inhabited by a different race (dwarves, lizard-men, hawk-men) enslaved by the evil Ming, who inspires them to constantly war on each other.
Apparently the notion of the various races uniting in alliance against Ming is a human thing that would never have occurred to them naturally, and thus does Flash spearhead a revolt against Ming and his cyborg henchmen, with the inside help of Ming's own sexy daughter and a not-always friendly Robin-Hood-esque outlaw. The latter played by Timothy Dalton, virtually unknown to American audiences at the time. And the flick also seems to mark the screen debut of Robbie Coltrane, quite recognizable even though he only appears for about half a second.
With silly, Viking-style birdmen (whose wings barely flap), harmless sexual innuendo and silly dialogue puns and gags (combatants are killed by ray-gun blasts from...crossbows?!) from the same screenwriter who did the Adam West BATMAN movie, this just isn't the picture for you goateed fanboys who beam reverently when Kevin Smith or J.J. Abrams or someone promises to do a Flash Gordon that gets away from the campy, silly Flash Gordon of the 1960s and back to the original dark, brooding, psychotic Flash Gordon of the 30s and 40s. Dammit Jim, comic strips tend to be campy and silly! Deal with it! In recognizing that simple fact Hodges delivered a big, goofy bonbon of pure future-nostalgia eye candy, well worth the indulgence on the big screen.
Let's not leave out the legendary glam-rock soundtrack by Queen, who are top-billed. That youth-market gambit should be the worst idea ever (just a few years later it would've been hip-hop) but instead made the most brilliant choice in fantasy-flick music since Kubrick scrapped his Alex North original compositions for 2001: A SPACE ODYSSEY and stuck with classical waltzes. I dare you to resist stomping your feet during the FLASH GORDON opening chords. Nice that Brian May got to realize a return on his studies in astrophysics.
Yeah, as THIS IS SPINAL TAP taught us, there's a fine line between genius and stupid, and I'm sure for some viewers this FLASH GORDON disco-dances perilously on that boundary. But in a few months humanity is going top be attacked by the long, long-awaited adaptation of Edgar Rice Burrough's John Carter of Mars, also a proposed screen project since the 1930s - at one point begun as a serious cartoon by Chuck Jones and the Warner Brothers animators; decades later styled as a Tom Cruise vehicle. I'd be very surprised if that turns out at all as entertaining as this stellar kitsch.
Check out all the YouTube Flash/Queen tribute videos. I particularly recommend the Lego one. (3 out of 4 stars)
Posted by Charles Cassady Jr. at 12:01 AM