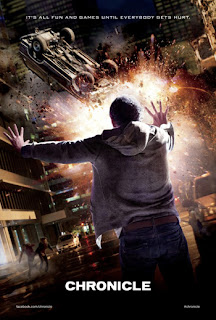 CLOVERFIELD and PARANORMAL ACTIVITY meet X-MEN: FIRST CLASS in CHRONICLE, the first major project from 27-year old Josh Trank and pal Max Landis (son of director John).  The “found footage” movie tells the story of three high school friends who gain superpowers after an encounter with an interred alien artifact and must decide how, where, when—or when not—to employ their extraordinary new talents.  Sadly, the film isn’t as spectacular as the Jedi Knight-cum-Superman feats the three amigos display.  Instead of soaring like a bird, the premise is battered by rote dialogue.  Still, it’s just fun (and, at a mere 84 minutes, brief) enough to make the ride worthwhile.
Andrew (Dane DeHaan) is a troubled senior who buys a camera to record everything in his sorry life.  “It serves a purpose,” he tells one friend regarding the intrusive device—but if there is a point beyond capturing the abuse Andrew suffers at the hands of his raging alcoholic father (Michael Kelly), it was lost on me.  Andrew does capture some footage of his gravely ill mother—but instead of seeming intrepid, or therapeutic, the teen’s document-everything approach comes off as creepy.  The cheerleading squad calls him out for voyeuristically videotaping their practices from the stands, and boys at parties accuse him of using his ever-present shoulder-cam to grab primo shots of their girlfriends.  Matt (Alex Russell) is Andrew’s confidante, brimming with just enough common sense cool to guide his socially inept cousin—but not enough to persuade him to stop filming.
Suave BMOC and would-be senior class president Steve (Michael B. Jordan) enlists Andrew and Matt for the excavation of a mysterious ditch in a secluded area near a classmate’s house, where a teen party (replete with glow sticks and bad music) raves.  We’re not privy to everything befalling the trio in the subterranean cave, but they discover something otherworldly, and Andrew’s morning-after video shows them giddily constructing Lego towers using telekinesis.
Trank does a great job projecting the exuberance of a 17-year old varsity letterman suddenly endowed with fantastic abilities.  At a stage in one’s physical and mental development when confusion and vulnerability are norms rather than exceptions, who wouldn’t want an upgrade to demigod status?  Andrew’s clips show the boys punching, stoning, and stabbing each other without injury.  They prank children at a toy store, where their mind tricks topple displays and make teddy bears dance.  Steve encourages withdrawn Andrew to use his “magic” at a talent show, where their uncanny juggling and tightrope-walking skills earn rock star accolades.  But “rules” are suggested after one of of them force-pushes a tailgating jeep off the highway, nearly killing the driver.
We won’t divulge who does what from that point, but there aren’t many surprises: One of the boys is seduced by the “dark side” and uses his powers for personal gain, revenge, etc. (a la Fassbender’s Magneto), and the others must stage an intervention.  There’s a curious (if unexplained) balance shared between the three, where mental overexertion by any one of the practitioners results in nosebleeds for himself and the others.
The “villain” quotes Plato and Sophocles for Andrew’s camera and tries butching up by labeling himself an “apex predator” who suffers no more guilt in hurting people than houseflies.  But the monologue-ing bad guy routine falls flat, and his overuse of pretentious sound bytes won’t impress anyone who’s taken basic high school biology and philosophy classes—which is to say, most of Trank’s target audience.  In trying too hard to sound intellectual, the dialogue comes off not only as dumb but as mildly insulting to the audience.  The bland writing also recycles hipster-kid hyperbole like “awesome,” and the story references almost every teen-movie stereotype in the book (including a black character who likes hip-hop, booty, and bling, and product placements for teen-centric snacks like Red Bull and Taco Bell).
But Trank can pick from wider range of shots and more angles than other “found footage” directors because his super-charged character documentarians can use their minds to levitate cameras around rooms and overhead.  And when Matt hooks up with pretty blonde Casey—who is also filming random events for her blog—we’re given a fresh perspective and sometimes get to see Andrew’s camera floating around.  Trank also draws from security surveillance footage (at a gas station and hospital) and live T.V. news feeds to follow the action, the scope and intensity of which steadily increases.  Not a new trick, but its application does help change things up.
The pedestrian acting doesn’t help.  The three principal leads hail from TV shows like The Wire, True Blood, and In Treatment and are all just a couple years younger than Trank and Landis—which, one supposes, they must be in order to pass for high school age.  But their inexperience and the filmmakers’ lack of funding occasionally shows onscreen; some stunts (the low-altitude flying) are so unconvincing that I began looking for vestiges of digitally-erased wires and pulleys instead of listening to the boys’ banter.  Other visual effects--such as Andrew's telekinetic dissection of a spider--come of better.
If great power begets great responsibility, as Spider-Man’s uncle once suggested, CHRONICLE is the story of a teenage threesome who can’t agree on any moral high ground until it’s too late.  What would you do if you could fly like Iron Man, stop bullets like Neo from THE MATRIX, or toss an automobile by sheer force of will?  Trank and Landis have a blast exploring the possibilities, and the trial-runs and early mischief drew lots of laughs at the screening we attended.  2 out of 4 stars.
Posted by Peter M. Roche at 12:01 AM