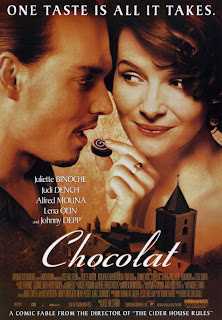 The student film society at Case apparently has deemed fit to revive CHOCOLAT as a proper cinematic St. Valentine's Day special. What, all the prints of TEXAS CHAINSAW MASSACRE already rented out? Come on, they just outfitted Strosacker Auditorium for theater-quality digital projection setup. Surely some faculty's got a bootleg DVD of FACES OF DEATH or some torture-porn more appropriate to the holiday? Yes, I'm cynical and bitter this time of year.
Okay, CHOCOLAT it is. This is a wannabe-whimsy from 2000, a peculiarly Clintonesque-era cinematic plea for passion, liberty and inclusion, was directed with fine actors and a hopelessly stacked emotional deck by the very capable Lasse Hallstrom, coming off his John Irving adaptation THE CIDER HOUSE RULES. As for CHOCOLAT, it derives from a popular literary source as well,the Joanne Harris' Peter-Mayle-meets-Silver-Ravenwolf novel of the same title, although overall flavor, thanks to the anti-censorship, pro-tolerance topping, is PLEASANTVILLE warmed over.
Setting is the French-provincial , in 1959, asleepy little town trampled under the combined jackboots ofRoman Catholicism and le Comte de Reynaud (Alfred Molina, lookinga little too much like Inspector Clouseau), a stiff-necked aristowho reads and vets all the sermons of the weakling parish priest
(Hugh O'Conor) and wields Scripture to keep a leaden lid on allthe district's dysfunction. A lyrical, fairy-tale opening heralds the windblown arrival of red-caped, scarlet-lettered Vianne Rocher(Juliet Binoche) and her fatherless daughter Anouk (VictoireThivisol). Neither of whom attend the town church, conspicuously.
In the Harris book Vianne was a traditional witch; here, in RobertNelson Jacobs' screenplay, she's descended from a South Americanshamaness chick (shades of a contemporary Penelope Cruz vehicle WOMAN ON TOP, remember that one? Anyone? Guess you didn't get a paycheck to watch it like I did). Beautiful, independent and intuitively psychic, Vianne is on a mission from God - or, more specifically, Goddess, or Gaia, or Miramax Pictures, or whatever - to wander the land spreading joy and sensuality via ancient Mayan recipes for cocoa.

Reopening a defunct bakery in Lansquenet's central square, Vianne dispenses chocolate that stimulates the tastebuds and starts to awaken the long-dormant joi de vivre of the citizens. With a few complimentary bonbons Vianne empowers a bedraggled wife(Lena Olin) to leave her abusive husband-from-hell, prompts a reunion between her elderly landlady (the great Judi Dench) and a stifled grandson, and melts the reserve of a dog-loving old bachelor long-enamored with a war widow (venerable LeslieCaron). Meanwhile le Comte de Reynaud and his cronies harumph and bluster with disapproval at the upsetting of their holy status quo. But they're all such creeps - and Vianne so ennobled - that the outcome of this Chocolate War of ideologies never lies in doubt.
While oppression-vs.-freedom remains a valid recipe for drama, CHOCOLAT's situations and arguments just got poured into too simplistic a mold for me. Vianne's ultimate triumph of free-thinking? A pagan-edged chocolate festival, to be held in Lasquenet on Easter Sunday. Tolerance can be a tres grand thing, but there are points when you can't help taking CHOCOLAT's treacly liberalism to its logical conclusion; why doesn't brave, broadminded Vianne march some Nazis through Skokie or the Taliban through Ground Zero on September 11 while she's at it?
The talented cast consists of mostly European actors trying hard to be more French and quaint than they already are, which can really stick in the throat. Johnny Depp shows up with an Irish brogue (but
French name) as chieftain of a bunch of traveling river folk and Binoche's love-sex-whatever interest, as the defiant heroine further tweaks le Comte by opening her store to the shunned gypsies.Where CHOCOLAT really suffers is in comparison to the 1987 Danish drama BABETTE'S FEAST, another feature about the healing power of seductively wonderful food on a calcified village religious community. That movie managed to respect the differences of all its characters, not just the ones who look hot in bare-midriff couture.
I tried to read the novel Chocolat and never finished it (though if it's any comfort to Ms. Harris I only got halfway through The Cider House Rules, too). I am given to understand the author later sequelized it, but this time did a narrative update focusing on Vianne's long-suffering daughter, and making the mother a more problematic and selfish character than viewers of this film might ever guess. It is perhaps unnecessary to say that Hollywood appears to have shown no interest in filming that book. Pity; I've got a great title: "Dark Chocolat." Sorry, when it comes to Valentine's Day I'm bitter. (2 1/2 out of 4 stars)