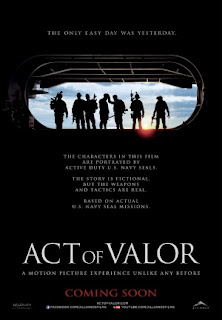 Despite my liberal leanings, I don't have any problem enjoying a Sylvester Stallone or Chuck Norris right wing action film where one super soldier single-handedly wins the Viet Nam War or takes out an army of terrorists bent on world destruction. The reason being that, whatever their politics, these movies are first and foremost entertainment. You just can't make a movie like that with a lefty peacenik hero, and regardless of my real world politics there's a part of me that enjoys watching this kind of violent fantasy.
ACT OF VALOR, on the other hand, is first and foremost propaganda. The film is essentially an hour and forty minute recruiting commercial that blurs the line between reality and fiction by casting real-life Navy SEALs as its protagonists. It was made with the full cooperation of the Navy, who had final cut, and the directors (the “Bandito Brothers”) give an introduction to the movie in which they play up its authenticity. The problem is, the authenticity is only surface deep.


Yes, these are real soldiers using real military equipment and evidently firing real live ammunition in some scenes. The SEALs (none of whom are credited) are not great actors by any means, but their performances are serviceable. They're certainly no more wooden than guys like Norris or Van Damme, and in a way their very blandness is yet another aspect adding to the film's sense of false realism.
Where the film leaves any semblance of reality behind is in its terrorist scenario and ridiculously over the top bad guys. Abu Shabal (Jason Cottle) is an Islamic jihadist from Chechnya. He's being helped by a Jewish smuggler named Christoph (Alex Veadov). Apparently this odd couple were friends as kids, and despite Abu's conversion to radical Islam, there's still a bond there.
The plot Abu has cooked up involves multiple suicide bombers blowing themselves up across America in the hopes that such an attack will destroy our economy (you mean it could get worse?). The movie manages to tie the Somalis, Phillipinos, and illegal immigration from Mexico into this scenario as well. It's like a tea partier's ultimate horror story about what will happen if President Obama gets re-elected. I'm surprised health care reform didn't get worked into the mix somehow.
Even if you find this plan plausible, the tone of the scenes featuring the bad guys is so cheesy it feels like something out of an eighties action flick. Cottle and Veadov give gloriously campy performances as complete and total movie bad guys with no shades of gray whatsoever. Both actors are a lot of fun, and I enjoyed the movie whenever they were on screen. Given all the attempts to sell audiences on the film's realism, though, it's either bad filmmaking, or else part of the film's intentional propaganda to portray things in such a simplistic, cartoonish manner.
Assuming you either agree with or don't care one way or another about the film's politics, it's a reasonably enjoyable action flick. The battle scenes are done the way I like 'em – down and dirty and fast paced, but shot in a way that you can still tell what's going on. I also liked that the gore effects were done old school with squibs and other practical, on-set effects. Watching the film strictly as entertainment, however, makes it harder to ignore the lack of any truly charismatic lead actor or actors on the side of the “good guys”. So in the end, whatever lens you view it through, this is one mission that probably should have been aborted. 2 out of 4 stars.
Posted by Bob Ignizio at 12:01 AM