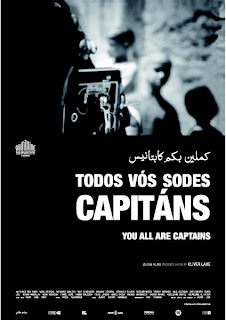 [YOU ALL ARE CAPTAINS screens Saturday February 4th at 6:50 pm and Sunday February 5th at 8:20 pm at the Cleveland Cinematheque.]

I must confess confusion over what YOU ALL ARE CAPTAINS is trying to pull off, exactly. So I'm going to talk about another movie initially, one most of you lot haven't even seen. What are you going to do, switch the channel? Internet journalism, deal with it. There's a poetic and touching picture called THE FIRST MOVIE, by filmmaker/activist Mark Cousins, a childhood survivor of civil-war conditions in Belfast, Northern Ireland.

Cousins believes strongly in the healing power of cinema (dude must not see most of the crap I do), and in THE FIRST MOVIE he takes a suitcase full of simple point-and-shoot HD cameras and a projection setup to a Kurd village in Iraq, one of the ones brutally gassed by Saddam Hussein in the 1980s. He gives the video cameras to the local kids and lets them tell their own stories in moving-image form.

It's all quite nice and bittersweet, this look at childhood touched by strife yet unspoiled. At least it's nice if you don't count the nagging feeling that everything in THE FIRST MOVIE is being filtered through Cousin's POV and editing-room choices. Are we really seeing the videos
these children really shot, unexpurgated? Is this honey-tongued outsider bringing his own biases and agenda to the material? These Kurd kids might have made hideous things with their video cameras. Torture-porn. Porn-torture. Death-to-America propaganda. A GREEN  LANTERN sequel... (I should apologize to the Kurdish race for any suggestion they would willfully make a GREEN LANTERN sequel)

Since that doubt/trust element and the thought of an "outsider" narrator is the theme of YOU ALL ARE CAPTAINS, I have to wonder if its creator Oliver Laxe might have seen THE FIRST MOVIE also - or if there are so many do-gooder filmmakers in the world going to trouble spots to film the kids that the concept is universally acceptable.

Laxe indeed seems to be one, and according to online bios has long worked with impoverished children in Morocco in grassroots filmmaking. If YOU ALL ARE CAPTAINS is the culmination of his experiences, it's an opaque statement, done almost entirely in black-and-white, in docu-drama fashion and gradual abandonment of any narrative form whatsoever.

The setting is a small Moroccan village, where a Laxe more or less portrays himself, a Spanish filmmaker coming to town with his wind-up 16mm camera (real celluloid, like the good old days) to make a movie, principally starring poor orphan kids in a local boarding school/shelter. From what we hear initially it's some sort of anthropological documentary, but soon the filmmaker is staging kids stealing, something that doesn't go
down well with either the children or their conservative elders. The shelter kids themselves doubt Oliver's motives and intentions - either that or they just don't get how movie narratives are usually shot out of sequence; they just think the domineering foreigner is making disconnected nonsense.

What little coherence this storyline has goes out the window altogether at mid-point, as [SPOILER ALERT], oh, come on, this plot is so nonexistent it doesn't even deserve a [SPOILER ALERT], I'm just typing [SPOILER ALERT] out of habit. Might have lost the few readers this post even had, the ones who stop reading when they hit [SPOILER ALERT]. Kind of cool, really. I can type anything I want now. Dig: [SPOILER ALERT] Ass! Boobies! Ron Paul for President! Hey, I mean it, if he's on the ballot I'd vote for Ron Paul. Sort of a prank vote, but if he winds up in the White House, fine. I don't think anyone's able to
straighten out the mess things are in, and Gingrich will be freed up to work on more of his alt-history novels.

Okay, seriously, after a gripe session during which the kids complain to their teachers and guardians about Oliver, and the stuff they'd rather be filming - olive trees, sheep, boats on the water, children playing - the movie just becomes that. Placid, disconnected shots in and around the Moroccan village, of olive trees, sheep, boats on the water, children playing. Some is of great pictorial beauty but - what's the deal exactly? A
gentle depiction of anarchy when the natives take over and expel the western imperialist? A threat to viewers that if art-house cinema takes over, this is what you get; now bring on the GREEN LANTERN sequel?

I don't know. Unless you're into ethnographic-perfect portrayals of Moroccans by Moroccans, it's a pretty flimsy item. But in all honesty I then watched LEGION OF THE DEAD, from 2005, direct-to-video schlock about an evil Egyptian princess found in a Pharoah-like tomb in Southern California (!!), and how she rises, bikini-clad in some scenes, nude in others, to collect souls of horny men from the motel to reanimate her
retinue of cut-rate flesh-eating mummy zombies. You'd think YOU ALL ARE CAPTAINS would make junk like that look pretty good by comparison, but it was really more like the other way around. So I still have some taste. But really, the only winner in the bunch is THE FIRST MOVIE. (1 1/2 out of 4 stars)
Posted by Charles Cassady Jr. at 12:01 AM