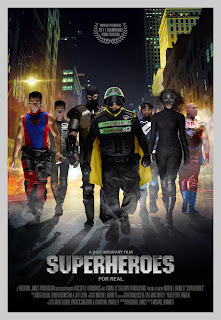 Just as Andrew Sarris considered the entire western genre as intrinsically childish, I just don't have much enthusiasm for movies based on comic books. Superhero comics especially...
(collective gasp of horror and disbelief goes up from the internet generation. Some faint; others make the Sign of the Cross at their screens)
...I don't care how many megamillions of dollars or terrabytes of CGI get thrown into the mix, I don't care if it's got the best actors of New York/Paris/London/Rome, I don't care if Michael Chabon or Jodi Picoult or David Mamet or the great Brian Michael Bendis himself writes the script, or if it gets away from the campy, silly Plastic Man of the 1960s and back to the original dark, brooding, psychotic Plastic Man of the 30s and 40s, the movie superhero trend is just lame already. And you wanna know something else? The same goes for movies based on videogames. Even Halo!
(collective screams of anguish, outrage. Millions of users douse their computers with Holy Oil in desperate attempt to make the scary words go away)
...But I'm going to give a passing grade anyway to the HBO Documentary SUPERHEROES. So you may want to grab your stupid X MEN souvenir cameras and take a picture for your HULK souvenir photo album to put on your JONAH HEX souvenir bookshelf in your SWAMP THING souvenir guest-bedroom in your ELEKTRA souvenir house (I believe they sell such junk at San Diego Comic-Con now; I've never been). Michael Barnett's feature is no immortal of nonfiction cinema, but it’s laugh-out-loud zany at times. Oh, and happens to be one of the few movies out there not based on a pre-existing comic book.
The "superheroes" in SUPERHEROES purport to be real, crime- and comics-concerned folk, average citizens, who now patrol cities in somewhat slipshod homemade costumes/body armor and personas. Their cheesy personas - Zetaman, Dark Wolf, Orange Cricket etc. - are original ones, mind you, not borrowed. Not even Rorshach from WATCHMEN (which would be kinda cool). Only one real-life superhero, a Florida guy named Master Legend driving a rusty van, claims to possess actual super-powers of excessive strength and stamina, which, to judge by his spiel, are evidently faith-based (holy BibleMan, Batman!). Others are confessed mortals who practice gymnastics, parkour, archery, inventing or martial arts to enhance their crimewatches and patrolling. Organizations of such bizarre do-gooders include Brooklyn's New York Initiative, 's Black Monday Society and 's Xtreme Justice League. ? No. No superheroes here since LeBron and Shaq left. We weren't even good enough for the guy who starred in STEEL.
The bulk of the "super" heroics shown amount to charity work or concerned-citizen assistance by the costumed avengers, though we do see some risky criminal-baiting practiced by Zimmer, TSAF, Dark Guardian and others in the New York Initiative, including what purports to be hidden-camera intimidation a drug dealer to clear out of a public thoroughfare, which is pretty don't-try-this-at-home. Otherwise it's helping assist a victim of a hit-and-run, feeding the homeless, that sort of deal, and who could argue with it? Still, a female San Diego police officer - who actually is comic-book pretty, looks like Barbara Gordon before she got crippled by Joker and quit being Silver-Age Batgirl and turned into the Oracle (ARRGH! I WISH I DIDN'T KNOW THIS STUFF! THOSE BRAIN CELLS COULD HAVE BEEN USED FOR A MED-TECH CAREER!) - worries such homebrew vigilantes as the ones found in the "superhero" movement ignore Constitutional law or due process, and something bad will transpire if this kind of thing goes unchecked.
But then it's back to the LOL moments, as these wannabes show off their gadgets and stuff. HBO's bantamweight presentation doesn't mention Curtis Sliwa and the Guardian Angels, a seeming progenitor in DIY law enforcement, or even cinematic outings like HERO AT LARGE, KICK ASS, SUPER and the Akron-made indie HERO TOMORROW that dramatized how homebrew superheroing might go. And in fact I understand that a superhero named Phoenix Jones is hauled into court from time to time for disturbing the peace and actually has restraining orders against him by other superheroes. Now there's a documentary! I'm assuming, of course, that so many reality-cams are now locked onto Phoenix Jones (and Kevin Smith at his side taking notes for a biopic) that he wasn’t visible for this project, or am I being a sucker in letting that omission slide?
An overlay of digitized comics-art panels and an interview with a bemused Stan Lee keep the fun stuff coming, and even if the ragtag adventurers are grandstanding for filmmaker Barnett’s lens half the time, well, it kept me pretty darn entertained, more than the last IRON MAN. Guess I’m more the type who'd prefer the campy, silly Orange Cricket of the 1960s instead of the original dark, brooding, psychotic Orange Cricket of the 30s and 40s.
Incidentally, SUPERHEROES should not be confused with a couple of recent documentaries (CONFESSIONS OF A SUPERHERO being the best known; makes an amusing double-bill with this if you can find ‘em both) on the peculiar Hollywood street subculture of movie-icon impersonators, mostly unemployed actors in superhero outfits, who take money from tourists to pose for pictures. You've probably seen them on Jimmy Kimmel's show, and they’ve had their own run-ins with the law, usually over charges of panhandling, which begs the question of what would it look like if a real-life superhero decided to intervene when Superman or Wonder Woman go too far in the begging?
Hey, it occurs to me maybe does have real-life superheroes strolling the streets after all. They’re just all takeoffs on Harvey Pekar-type dogface characters. (3 out of 4 stars)
Posted by Charles Cassady Jr. at 12:01 AM