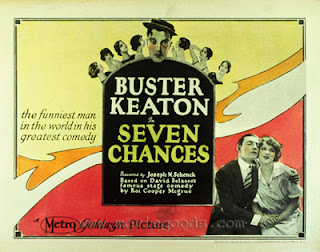 Buster Keaton is generally considered one of the best, perhaps even the best, film comedian of the silent era. Where the other contender to that title, Charlie Chaplin, tended to be more intellectual and prone to lighthearted whimsy, Keaton specialized in carefully orchestrated physical comedy, and his gags are just as likely to make your jaw drop as laugh. To put him in some kind of modern context, he's Jackie Chan without the kung fu. In fact Chan has often said that Keaton was his biggest inspiration.


The plot of Keaton's 1925 film SEVEN CHANCES is incredibly slight – a young man (Keaton) in financial trouble learns that he will inherit $7 million from his grandfather if he can manage to get married by 7 o'clock that day. After bungling a proposal to the girl he really loves (Ruth Dwyer), Keaton sets out to find a replacement and comedy ensues. Eventually, anyway.
Unless you count his latter day appearances in the BEACH PARTY movies, watching SEVEN CHANCES for this review was my first exposure to Keaton. My understanding is that this is “lesser” Keaton, and I can certainly see that. While the film has its pleasures, it just doesn't feel like a classic. There really isn't enough in the script to make a feature out of, even one that runs just under an hour, and in many ways this story worked better when the Three Stooges recycled it for their short Brideless Groom. But then, the Stooges never did anything like the last 20 minutes or so of SEVEN CHANCES.
Yes, it takes a while to get there, but it's worth it. Keaton puts together an absolutely fabulous chase scene as literally hundreds of would-be brides chase after Jimmy who makes death defying leaps across chasms and out of trees, then rolls down a hill with huge boulders (props, but still pretty heavy) tumbling after him. Keaton does his own stunts here, and as with Chan's modern day emulations, you can't believe he didn't kill himself.
Unlike some older films, there isn't a lot in SEVEN CHANCES that would make it difficult for modern audiences to enjoy. The basic plot, characters and situations would still work just fine in a modern film (in fact SEVEN CHANCES was remade in 1999 as THE BACHELOR), and since that plot is so simple, there's nothing “lost” by not having any dialogue. Seeing a few actors in blackface and a couple of cringe-inducing racial gags can't help but make enlightened modern audiences uncomfortable, but those were the times. Lesser Keaton it may be, but in the end SEVEN CHANCES still offers up enough laughs and gasps to warrant seeing. 3 out of 4 stars.
Posted by Bob Ignizio at 12:01 AM