Queen Kelly (January 21st and 22nd at the Cleveland Cinematheque) 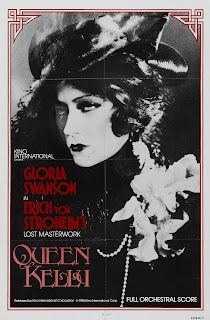 It's a debate that's been waged at gallery openings, cocktail parties and during the lulls at high-class orgies - the concept underlying the execution, the intention behind the result: does it ever matter when judging a work of art? I know - I tend to be a bit liberal in offering passes to films whose creators have unofficially appended sad-eyed disclaimers via interview or commentary track blaming this or that iron-fisted corporate oligarch for undermining the translation of idea into expression. But even the most fervent formalists among you have gotta doff your "Death to the Artist" sandwich boards long enough to give a woot-woot to the1929 film QUEEN KELLY, 1/3 of a would've-been epic that's better for being a fragment of a goliath of a dream than a whole-cloth reproduction of a Lilliputian of an idea.
Even at a fraction of its intended length, there's plenty to enjoy. Predicated on a forbidden affair between convent-bound orphan Patricia Kelly (Gloria Swanson), and the wilding Prince Wolfram (Walter Byron), who's unhappily betrothed to a sadistic, nymphomaniacal monarch (Seena Owen), QUEEN KELLY charts a charmingly tawdry course from the palatial bedrooms of European royalty to a remote East African brothel. For those viewers unaware of the movie's prematurely abbreviated history, several paragraphs of historical background appended to the front of the film by restorers and distribution house Kino International give the skinny. In short, actor, writer and director Erich von Stroheim (THE MERRY WIDOW) imagined a 5 1/2-hour epic love story, which he planned to write and direct. Stroheim played fast and loose with the production money, staging lavish scenes and resolving snags through the liberal application of cash. There was also an issue with the aforementioned brothel, which producer and lead actress Swanson claims was originally described as a "dancehall." With just over 90-minutes shot, Swanson and the studio pulled the plug.
(As a bonus, knowledge of the film's history also enhances Billy Wilder's iconic and incomparably wicked SUNSET BOULEVARD, which stars both Swanson and Stroheim, and features footage from QUEEN KELLY.)
While it's easy to focus on, and enjoy, the more superficial trappings of the film's intended sweeping grandeur - the horses, the gorgeous sets, the banquet scene's platoon of elaborately costumed extras - it's the methodical, patient filmmaking that makes QUEEN KELLY special. Epic love stories demand convincing ardor - the sort of love that's fated, but also fought for, and marinated in time, conversation and passion before giving way to destiny. There's plenty of cinematic shorthand for love, and Stroheim certainly doesn't eschew the furtive glances, the winks, the embraces or the classic cut-implied intercourse, but he also gives a healthy length of film, in the form of a clandestine late-night dinner date, to Wolfram and Kelly's burgeoning relationship - no small feet considering that he can't rely on their conversation without throwing a full deck of intertitles at the audience, a choice he, thankfully, rejects in favor of a few pointed lines and joyfully expressive physical work by the actors.
For those who have a tendency to cringe at films about which critics overuse the words "epic" and "love story," know that I count myself among you, and you needn't worry. Stroheim is a pro at measuring the mush with physical comedy and brazen, tongue-in-cheek sexual innuendo. Plus, there's that jealous, copulation-crazed queen who, in one of the film's most audacious sequences, administers royal justice with a leather riding crop. And, of course, the aforementioned East African brothel, in which much of film, had it been finished, would have taken place. Whether or not Swanson's assertion that she was unaware that her character's "dancehall" specialized in mambos of the horizontal variety, the film's transition from the palaces of European royalty to hellacious sweat-laced flophouse dinge really is a crazy left turn - but in the best way possible. One gets that sense Stroheim wasn't only attempting to portray a love that spanned oceans, but also genres. Look out especially for the villainous Jan Vryheid (Tully Marshall), a crippled, leering degenerate straight out of '20s pulp fiction, complete with rickety crutches, an alligator pin and a bottle of bottom-shelf rum perpetually tucked in the side pocket of his moth-eaten blazer. My favorite bit is the toast he shares with his prostitute accomplices: "To crime!"
To avoid the inevitable awkward disappointment of simply stopping the film where the footage runs out, Kino did a nice job of creating a brief epilogue that, through still photographs and descriptive intertitles, see Stroheim's plot to its intended joyous conclusion. It's a shame that the director never got to fully realize his vision, but, in thinking about some of the grand scale passion projects that have attained some measure of totality - HEAVEN'S GATE, ONE FROM THE HEART, SOUTHLAND TALES - I can't help but recall the old show business adage, "always leave them wanting more." And in the best way possible, QUEEN KELLY certainly does. (3.5 out 4 stars)
Posted by Matt Finley at 12:01 AM