Pianomania (January 21st and 22nd at the Cleveland Cinematheque) 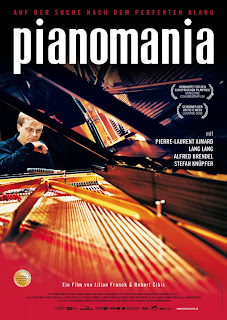 In my other hanging-by-fingernails career as a book reviewer I gave a less-than excited writeup to a peculiar medieval fairy-tale-fantasy partially written in Norse dialect, complete with formal and informal and Court-of-Royalty address modes, a glossary, a talking flying squirrel and laissez-faire politics. I wasn't even negative about it, just...not thoroughly enchanted. The offended author has complained to the publisher, and I imagine will next be coming after me with a retinue of dark elves, broadaxes and a trebuchet. Good thing I know an actual knight to fight for me - John Ewing of the Cleveland Cinematheque, recently presented with a Chevalier d'Honneur by the government of France for his support of the French film industry. I picture him now like one of those Frank Frazetta warrior paintings, broad-shouldered armor studded with spikes, perched atop a giant, quasi-reptilian steed with blazing red eyes. Bring it on!

But now I'm going to give an unenthusiastic review to PIANOMANIA, a German-Austrian production Ewing has imported here. So I can't depend on Ewing's mighty sword and oaken shield to defend me either.


Faint praise is in order, I guess. In between the CWRU Film Society's annual Sci-Fi Marathon, the Superbowl on TV and whatever high-testosterone mass-audience junk opening Friday at the multiplexes that was too lousy to release during the Oscar-qualifying final weeks of 2011, PIANOMANIA neatly satisfies the only viewing demographic without an entertainment option this weekend, classical-music-movie junkies. The documentary feature is a ride-along with one Stefan Knupfer, a spritely and cheerful Teuton in the employ of the Vienna branch of the legendary Steinway Piano Company. Knupfer is a master grand-piano tuner and troubleshooter in a Mozart-ridden city that's to classical piano concertos what Vegas is to strip clubs and casinos. Or Cleveland is to unemployment. Knupfer has to please virtuosos and divas of all types by delivering instruments that function to the most persnickety audio specifications - subtitle of the German-Austrian co-production is "the search for the perfect sound."

In the process the hardworking hero must satisfy what seem at times to be absurdly impossible demands of any 88 keys. "Does it `live' here?" asks a British pianist about one instrument, meaning is it the piano that has been in residence at this particular institution permanently, or is it on loan? This, apparently, makes a big difference. So does the age of the great instrument, condition of the hammer heads, and the presence of strategically placed pieces of felt. Knupfer remembers a client who pulled a large lint chunk/dust bunny from a piano; Knupfer made him put it right back, lest the tone or timbre or whatever be detrimentally altered.

Which is a cool story, but, cinematically speaking, not terribly transfixing. Filmmaking duo Lilian Franck and Robert Cibis are all formal, Kubrickian camera angles and lovely wide shots as Knupfer tweaks strings and soundboards, and recording technicians sit around laptops to evaluate if the latest gigabytes are satisfactory (is it me, or were analogue recording sessions more interesting?). We don't learn much about Knupfer off the job, assuming he ever is, just that he harbored ambitions to be a professional pianist but after beholding too many suffering-artist types, judged a tech-oriented career route to be a healthier music option. Best bits concern Knupfer trying to fulfill the eccentric needs of musical comedian Richard Hyung Ki-joo, who does things slapsticky to pianos and other instruments that nature never intended (like substituting a violin for one concert-grand's leg). Here the indefatigable Stefan seems to be having the most fun of all.

That's a docu subject I'd like to see explored, the cultural heritage of the likes of Victor Borge, Gerard Hofnung, the Peter Schikele and of course Spike Jones, who clowned around with the stodgy image of classical music. And doubtless had dogged techs like Stefan working tirelessly behind the scenes to make it still sound as good as possible. PIANOMANIA, meanwhile, is a decent, polite, staid entry for the Severance Hall crowds (or is it now Quicken Loans Hall by now? Just asking...), in the shadow of which it is most appropriately screening. So score high for timing and place. I'll give it that. Sorry Mr. Ewing. But I do believe the whole knighthood deal was incentive to show more French stuff anyway. Don't you want that upgrade to Count John Ewing? (2 out of 4 stars)