2011 was a great year for movies… or so I’m told. I was a total cinema slacker this year, due to equal parts full-time employment and general chronic lumpishness. Any authoritative list I made would, therefore, be under-informed, incomplete and sweaty with mis-appended superlatives. But, after all, this is the internet… and I do have opinions, so I may as well write something.
A Few Movies That I Dug, In The Order That They Occurred To Me As I Sat Here Writing This: 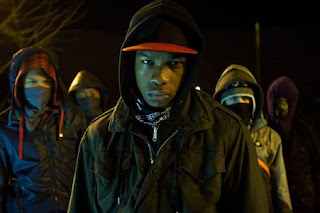 ATTACK THE BLOCK - Undeniable urban science fiction. cracking creature design, a groovy dubstep-by-way-of Ed-Wood score by the blokes from Basement Jaxx, and solid action all bangered and mashed together with a massive helping of Britsy pop culture-soaked wit. And it still manages a biting socio-political subtext.
SOURCE CODE – smart, heartfelt sci-fi that’s more about a character than any sort of audacious, high-concept shenanigans… but which also has plenty of audacious, high-concept shenanigans. In the hands of a less competent director, this film could’ve easily felt like an over-extended gimmick in the vein of DEJA VU or that (admittedly pretty boss) 6th season X-Files episode, Monday. Duncan Jones makes it work – it’s smart, fresh and, most surprisingly for modern sci-fi action blah, poignant.
DRIVE – This is the film I imagine Michael Mann would make if he went to France and ate a baguette full of barbiturates. I liked its artification of modern action cliches, but loved it’s occassional moments of horror genre-riffing Lynchian violence – a dying man is attacked by a killer in a rubber mask as both are rhythmically bathed in light and swallowed by darkness thanks to the stoic rotations of a lighthouse beam. Bad. Ass.
MEEK’S CUTOFF – Really, all you need to tell me is, “Oregon Trail-set period western!” and I’m down. This film is surprising, bleak and mutedly beautiful. The sound of turning wheels hasn’t carried this much dreadful gravitas since THE SHINING.
THE SKIN I LIVE IN – Pure bughouse soap opera madness. Mixes Almodovar’s confoundingly deft melodrama with a horror movie premise that makes the smirking, convoluted machinations of Jigsaw look as boorish and banal as the machete-swinging knuckle draggery of Jason Vorhees. Bonus points for actually making the audience, like, think about stuff.
TABLOID – Though certainly not as revelatory as THE THIN BLUE LINE, or as unapologetically quirky as CHEAP, FAST AND OUT OF CONTROL, Errol Morris’ new documentary, the story of a story about sex, kidnapping, Mormonism, and pet cloning (!!!), is exactly as entertaining and WTF-eliciting as it sounds.
Props also to SUPER 8 for being legitimately fun and touching in a sappy, popcorny ‘80s kinda way; BATMAN: YEAR ONE for its faithful treatment of a classic tale of Gotham’s Dark Knight; X-MEN: FIRST CLASS for, if nothing else, making the Hellfire Club into S.P.E.C.T.R.E., complete with a tricked-out, Heffner-worthy submarine (and that awesome kitschy end credit sequence. Seriously.); RISE OF THE PLANET OF THE APES for being a worthy ape prequel with genuine ape pathos; And THE MUPPETS because, c’mon… muppets!
A Movie I Haven't Seen Yet That Probably Would Have Made This List If I Had:
MELANCHOLIA - I know the things I like, and Lars Von Trier and planets are two of those things.
Two Movies That Were Really Disappointing And That I Probably Shouldn’t Have Been Excited For, But Which I Was Excited For For Reasons That, In The Cold Clear Light Of Rational Thought, I Cannot Fully Explain:
THE THING – They promised lots of practical effects, and Mary Elizabeth Winstead is frustratingly crush-worthy. I think in my heart of hearts, I knew they’d muck this one up, but in my regular heart I was punching the air and chest bumping stuff. I’m dumb.
COWBOYS AND ALIENS – I swear to Gazoo everyone was saying that this was going to be awesome. Then it wasn’t awesome. At all. Boo and hiss.
One Movie That Lots Of People Liked That I Thought Was Really Mediocre And, Honestly, Kinda Boring:
THE DEBT – It’s called “the debt” because it owes me my money back. ZING!
A Stray Observation About Cinemark:
Front Row Joe, Cinemark’s beloved (is that the right word? Maybe I mean passively acknowledged by a few people) mascot, a swaggering man/feline hybrid creature, has been all but removed (you can still sorta see him inexplicably flying a plane in the new intro) from the theater chain’s promotional materials. I was always less intrigued by Joe than by his girlfriend (also a bipedal cat monster), Popcorn Penny, who, as many of you probably remember from the old promo reel, worked both the ticket booth and concession stand when Joe went to see a movie. That’s right – she’s the only employee we see at the theater, and then, when Joe arrives, she inexplicably decides to abandon her post and sit beside him in the dumb, neck-craning front row, which his mom named him after because he was either conceived there or, due to spinal abnormalities stemming from the fact that he’s a grotesque genetic experiment and/or product of an unholy union between cat and cat fancier, his neck is naturally craned so she knew he’d prefer the front row if he went to the movies, which he’d probably do a lot because theaters are dark, so people can’t ogle his deformities, and it allows him an escape into plaintive fictions where he can imagine a life that isn’t spent imprisoned inside the freakish sinew and tissue of a heinous abomination against God. My point is that whoever animated Popcorn Penny seems to have spent an inordinate amount of energy rendering her breasts. Why do they want me to find this creature sexually arousing?
Anyway, Joe and Penny are gone now. It may have happened prior to 2011, but it’s just now sinking in that I’ll never curiously ogle those CG cat boobs ever again.
Happy New Year. And keep watching cool movies. Or something. I don’t have a regular pithy sign-off line. Oh, okay, how about, And watch some movies with your buddies or significant other (or others if you’re really progressive and sexually confident) or family or some combination thereof. No. Too long. Here we go: Happy New Year. And consider giving PREDATOR 2 another chance!
Posted by Matt Finley at 12:01 AM