[MAN ON A MISSION screens Wednesday January 25th at 7:00 pm at the Cleveland Museum of Art.]
Review by Bob Ignizio 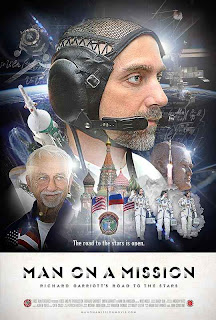 Have you ever dreamed of being an astronaut? Well now you can be, provided you've got an extra $30 million lying around and can make it through the 1 year training program, which includes a crash course in Russian. You'll need the language skills, because this opportunity isn't available through NASA. Only the Russian space program is willing to let “space tourists” fly on their rockets to the international space station at this time. RICHARD GARRIOTT: MAN ON A MISSION recounts the efforts of it's subject to become just such a space tourist.
Richard wants to follow in the footsteps of his father Owen, who spent time on board Skylab and Spacelab-1. The whole “second generation in space” thing makes for a nice angle, but there's still the matter of coming up with the money. Fortunately for Richard, that's not a problem for him. He started writing role playing computer games when he was in high school, and eventually make a fortune off of his best-selling Ultima series of games.


And so as we see in MAN ON A MISSION, Richard buys his ticket, goes through the training, and gets ready for his date with destiny. This isn't the kind of film that tries to build suspense as to whether its subject will succeed. That Richard did indeed go into space and return safely home is no mystery. It may not have been the biggest news story, but the information is out there.
What we're left with is Richard's life story, and the training process he goes through. There's also a little bit about the experiments Richard wants to conduct while he's in space, and of course the actual space experience itself. Richard himself is fairly interesting, but not nearly weird enough to carry a film on his personality and quirks alone. Director Mike Woolf manages to keep his film chugging along well enough, and it's both informative and reasonably entertaining for the most part. It's not that this isn't an interesting subject, but if you were to pare this movie down to a 20 minute segment on NOVA or some network news magazine show, I don't think you'd really lose that much of importance. 2 1/2 out of 4 stars.
Posted by Bob Ignizio at 12:01 AM