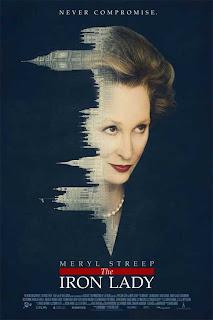 Last week I had the opportunity to review two films about Western European political leaders – THE CONQUEST, about the rise of French president Nicolas Sarkozy, and THE IRON LADY, starring Meryl Streep as erstwhile British Prime Minister Margaret Thatcher. Of the two, THE IRON LADY, directed by Phyllida Lloyd, is the more satisfying dramaturgically, yet neither film provides a complete picture of its subject's politics and importance. Where THE IRON LADY does excel is in its sensitive portrayal of the experience of dementia. Having suffered a series of strokes and suffering from memory loss, Thatcher, now 86 and frail, seldom appears in public.


Admittedly, the prospect of another impersonation of a famous doyenne by America's anointed top actress, Meryl Streep, was not compelling. But, as it happens, she is superb, particularly as the aged Mrs. Thatcher, whose husband, Denis (the excellent Jim Broadbent), regularly consoles, cajoles and encourages his wife, even though, as daughter Carol (Olivia Colman) points out, he has been dead for years.

The familiar, loving interaction between Margaret and Denis' ghost is a clever framing device, launching a series of flashbacks as the intermittently lucid ex-PM sorts through her late husband's possessions. Abi Morgan's imaginatively structured narrative uses inventive avenues for recollection; for example, while autographing copy of her book, Margaret inadvertently signs “Margaret Roberts,” her maiden name, which launches a flashback to the her girlhood days as the daughter of a grocer in Grantham. (Her father owned two stores and was mayor of the town). Young Margaret (Alexandra Roach), mocked by her better-heeled classmates as she sweeps up at the shop, wins a place at Oxford, from which she emerges with fully formed conservative ideology – free market economics, anti-union, anti-Socialist – and a burning political ambition. Margaret's father was a Liberal, but the film's , the narrative offers no insight into the origins of her views. A Thatcher biography reveals that she was influenced at Oxford by Friedrich von Hayek's The Road to Serfdom, a 1944 work that argued that government economic intervention is a precursor to authoritarianism. Though she was not a strictly doctrinaire Conservative (she supported a bill to decriminalize homosexuality, for example), she also was known, while serving as Education Secretary, for denying schoolchildren free milk.

Her determination impresses young, bespectacled Denis Thatcher (Harry Lloyd, who is Charles Dickens' great-great-great-great grandson), who asks her to marry him. She happily accepts, and the couple enjoy a comfortable life. (Denis, a wealthy businessman, financed his wife's studies for the bar and her political career; the film doesn't mention her early career as a research chemist and as a barrister specializing in tax). The two become the parents of twins, Carol and Mark, who are shown as children running helplessly after “Mummy” as she drives her fancy car away from the family estate and toward her Parliamentary career. Before she agreed to marry him, Margaret warned Denis that she refused to be simply a housewife – like her mother, presumably – and did not intend to “die washing a teacup.” (In a moment of sad irony, a later scene has the aged Margaret, all alone, washing out a teacup.) In her old age, Margaret is depicted as still proud and tough – she haughtily rebuffs her doctor's inquiries about her health and state of mind – the story allows her some sentimental reveries: her lifelong courtship with Denis is punctuated by the couple dancing to “Shall We Dance?” from their favorite musical, The King & I. Mrs. Thatcher also has a penchant for Bellini's opera “Norma.”

The film takes us on a newsreel view of British history from 1959, when Mrs. Thatcher was elected a Member of Parliament – not the first female M.P., as the film implies – through her turbulent reign as Britain's first woman Prime Minister, beginning with her election in 1979 and ending with her resignation in 1990 after she lost her Conservative Party's support. (The film implies that she disappeared from politics, when actually Thatcher served as a Member of Parliament for two years before retiring at 66.) These were tumultuous years for Great Britain; Thatcher is shown responding to labor unrest (with harsh anti-union measures), IRA hunger strikes and bombings, including one that struck the Brighton hotel where she was staying, and the war with Argentina over the Falkland islands, which boosted Thatcher's flagging popularity at home. Her legendary intransigence toward the Soviet Union, alongside her ally Ronald Reagan, earned her the nickname “The Iron Lady” from a Soviet newspaper.

While the film capably depicts Thatcher's unflinching hardness – denouncing labor unions, the social welfare state (and its “culture of dependency”) – what is missing is a ground-level view of how Thatcherism affected people in the UK, many of whom were left unemployed and dispossessed by her economic policies. Her legacy is still being debated, but her impact on popular culture is clear. Without Thatcher to protest against, there would likely have been no British punk music. Unfortunately, the soundtrack contains none of the era's iconic Sex Pistols, Jam or Clash songs, but it does include “I'm in Love With Margaret Thatcher,” a relatively minor-league 1979 song by Michael “Haggis” Hargreaves (“I'm in love with Maggie T.!”).

Streep is fine, even if occasionally calling to mind her portrayal of Julia Child, and Broadbent is a pleasure, though it must be said, jarringly different in appearance and accent from Lloyd's younger Denis. The prosthetic aging makeup is tastefully done, in contrast to the bizarre work in last year's J. EDGAR. While very skillfully constructed, the film suffers from the problem of all biopics that attempt to portray a significant life against the backdrop of history. In the attempt to cover the life and the history, one or both will suffer. In this case, it's the history; we learn more about the lady than about the interesting times in which she served. 3 out of 4 stars.
Posted by Pamela Zoslov at 2:44 PM