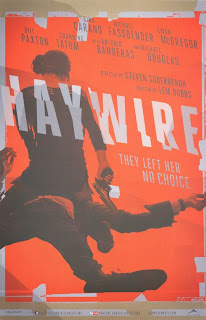 Since his feature film debut SEX, LIES AND VIDEOTAPE in 1989, Steven Soderburgh has had a career both interesting and varied. He effortlessly bounces back and forth between big budget Hollywood hits like ERIN BROCKOVICH and the OCEANS series and low budget indie films like BUBBLE and THE GIRLFRIEND EXPERIENCE. Along the way, he's dabbled in just about every conceivable genre, racking up more hits than misses.
Soderburgh's latest effort is HAYWIRE, a martial arts action film with an arthouse sensibility. The plot is yet another take on the old “honest cop/soldier/whatever gets framed by their corrupt employers” scenario we've seen dozens of times. Every action hero or heroine has to do a movie like this at least once, and this time it's Gina Carano's turn.


Whatever problems HAYWIRE has cannot be blamed on Ms. Carano; she's easily the best thing in the film. Like many of her male counterparts, she comes not from the world of acting but from the world of real life ass kicking, specifically professional mixed martial arts fighting. She's not the best actress in the world, but like all good action heroes she has a certain presence that, given the level of the material she's working with, is more than adequate.
What fans of this kind of movie really care about are the fight scenes, and the few HAYWIRE gives us are superb. Unlike the elaborate, almost balletic choreography of Asian martial arts films, the battles here are brutal and raw. Thankfully, Soderburgh avoids the modern tendency to film such scenes with a shaky hand-held camera (all in the name of gritty realism), nor does he edit the hell out of them to the point of incoherency. This results in scenes that not only are exciting and visceral, but you can actually tell what's going on. If nothing else, Soderburgh should be commended for this.
So why didn't I enjoy this movie more? There's a great supporting cast here (including Michael Douglas, Ewan McGregor, Antonio Banderas, Bill Paxton and Channing Tatum), but they're neither given interesting, complex characters nor are they allowed to just chew the scenery and ham it up. Okay, maybe Banderas gets to ham it up a little bit, reveling in the chance to play against his sex symbol image.
Mostly, though, it's just the general tone of the film that bothered me. Soderburgh shoots HAYWIRE in grainy browns, reds and oranges. It's murky and somber with very little sense of fun. I don't have a problem with a serious and moody action film. Hell, DRIVE was my favorite movie of 2011. But DRIVE had a script with some substance to it; HAYWIRE does not. So either Soderburgh needed a better script, or he needed to embrace the exploitation charms and formulaic familiarity of the one he had and just have a good time. 2 out of 4 stars.
Posted by Bob Ignizio at 12:01 AM