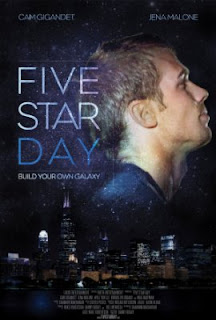 [FIVE STAR DAY is now available on home video.]
Review by Charles Cassady, Jr.
Many years ago there was this mystic fellow on Cleveland radio called variously "Count" or "Doctor" John Manolesco, a shadowy figure who hosted a nighttime paranormal-talk radio show on the local airwaves, before that notion became  commonplace. He cultivated a mysterious demeanor, helped by what some would construe a sinister European-Transylvanian accent - hence the "count" part - though he claimed to hold various lofty doctorates and PhDs. He broadcast shows about ESP, predictions, reincarnation, aliens, conspiracies, stuff like that. At one point he claimed to have developed a revolutionary hydrogen-powered car, solving the world's oil crisis - but it got stolen, so there.


He made an amusing sideshow during Cleveland's darkest default years in the 1970s. I'm not sure how many in the mainstream took him seriously, especially his many PhDs. I actually wrote a radio comedy sketch about the guy back when a Cleveland station let me on occasionally, and he attended the performance and seemed to take it with good humor. Still...had a vengeful Count Manolesco secretly put a baneful wizard hex on me as payback for the ridicule, it would go a long way to explain why much of my subsequent life unfolded the way it did. Oh yes it would...
The eccentric fellow died/left this astral plane a while back. If he had lived much later you'd find traces of him all over this amazing internet thing (that no psychics predicted), but when I did an online search of him what little I found were articles about astrology, on which he seemed to be quite a serious authority.
If it at all neutralizes the curse, let this review (to be read aloud, by a trained spirit-medium, if you really want to do me a favor) at least partially satisfy Manolesco's undying wrath, that I am about to say a few nice things about an astrology-driven romantic comedy-drama when I don't believe in astrology. The feature is called FIVE STAR DAY, and while no constellation- sensation it's got a nice indie vibe and some generally inoffensive coffeehouse wisdom to it.
On his birthday Jake Gibson (Cam Gigandet, who I'm given to understand is a discovery of the TWILIGHT franchise), a late-20's dude in Chicago with a dreamy blonde live-in girlfriend and an upscale job, reads a newspaper astrology-column prophesying that prosperity and success in relationships await him. Instantly he is brutally downsized out of his corporate job, first in a chain of personal disasters. He's lost his car, and we notice the dreamy blonde girlfriend's abrupt absence. Jake is having a really, really bad day, much of which is revealed only gradually in flashback, belatedly explaining why the protagonist suddenly has a snarling beef with the universe and a chip on his shoulder the size of the Sears Tower.
The accumulated disasters make Jake decide to disprove astrology in a crucial presentation at his concurrent college ethics class. Why should acing an ethics class be a make-or-break for this guy? I dunno, maybe that's a University of Chicago inside joke, or having a degree in Philosophy is actually some kind of employment skill in that city. I've only been to Chicago a couple of times, on fruitless job searches, after which I discovered I didn't get hired because I'd failed to bribe a local corrupt politician. Irish guy, I guess, name of O'Bama. Okay, just joking, couldn't resist.
But I did try and fail to snag a Chicago career, so no doubt there's quite a bit of local color and neighborhood references here that got right past me but will charm any Windy City lovers (you listening, Les Roberts?) in what transpires: In order to overturn astrology, the vengeful Jake. Jake hunts down (or stalks, as the case may be) other individuals born within hours of him in the same hospital, to see if their birthdays also went awry, thus disproving any cosmic web of fate.
One is a single mom (Jena Malone) in an uncomfortable situation with her baby's father, a drug addict. Another is a married social worker-clinician, suspicious of Jake's motives. Another is an easygoing fellow who's an aspiring male night-club crooner. At first it seems they don't have much anything in common. But in the process of becoming deeply entangled in the personal lives of these strangers, [SPOILER ALERT THAT'S ONLY A SPOILER IF YOU DON'T GO TO R0M-COM MOVIES MUCH], jaded Jake finds renewed purpose and a bright new start for himself, thus ultimately making that rosy newspaper astrology prediction come true after all.
What could have been sappy stuff is served up by director Danny Buday with enough astringent wit, a catch-you-off-guard story structure, and a college-hipster soundtrack sufficient to come across as a decent dramedy, about how things can get better if people start to give a damn and connect and care about each other (at least in Chicago; I can’t promise much about Cleveland) which is a noble enough conclusion whether the script ends up being an apologia for astrology, scientology or any other -ology or pseudoscience you want to name.
So there, FIVE STAR DAY is an okay little brightener, especially this bleak time of year when formula date-flicks potboilers seem to proliferate for the Valentine's Day crowd. Now, Doctor Manolesco, am I spared? (2 1/2 out of 4 stars)
Posted by Charles Cassady Jr. at 12:01 AM