Elite Squad: The Enemy Within (January 26th and 27th at the Cleveland Cinematheque)

[ELITE SQUAD: THE ENEMY WITHIN screens Thursday January 26th at 8:35 pm and Friday January 27th at 7:15 pm at the Cleveland Cinematheque.]
Review by Bob Ignizio 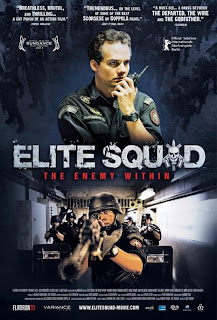 When it was released in 2010, ELITE SQUAD: THE ENEMY WITHIN (Tropa de Elite 2 – O Inimigo Agora é Outro) quickly became the highest grossing native-made film in Brazil's history. With its populist politics and thrilling action sequences, its not hard to see why the film would resonate with audiences in a country where the poverty, crime, and political corruption this film rails against are all too common.
ES:TEW is narrated by Roberto Nascimento (Walter Maura), leader of the BPOE or “Skulls”, a special military police unit known for the particularly harsh way they deal with drug cartels and other criminals that Nascimento invariably refers to as “scumbags”. Nascimento's rival in more ways than one is liberal crusader Diego Fraga (Irandhir Santos). Fraga deplores Nascimento's tactics, labeling the officer a fascist. This wouldn't bother Nascimento nearly as much if Diego weren't married to his ex-wife Rosane (Maria Ribeiro) and turning his son against him.


The main plot, however, concerns Nascimento's efforts to stamp out the drug trade in Brazil. After his actions in a prison riot make Nascimento simultaneously a public hero and a political hot potato, he gets transferred to another department. From this new position, he's able to stage highly effective attacks on the cartels. What Nascimento doesn't realize, though, is that he's being used to further the political agenda of several corrupt politicians, something Diego is very much aware of. In the end, everything hinges on whether these two men can put aside their differences to find common ground and defeat the real enemy.
ES:TEW is very much in the tradition of “clean up the streets” cop movies like the DIRTY HARRY series, or a Chuck Norris film if someone had bothered to write a decent script. Kind of pointless given Chuck's range, I know, but I'm imagining here. Anyway, while I may be more or less a liberal in real life, I like my action heroes staunchly conservative. Have you ever seen a decent liberal action hero? Didn't think so. At best you wind up with a goofy curiosity like Billy Jack, who kicks ass in the name of nonviolence. Huh? No, for a movie like this you need a right wing vigilante type or it just doesn't work, and Nascimento fits that bill perfectly.
While I have no doubt that director/co-writer José Padilha's sympathies lie mainly with Nascimento, he balances that somewhat with the character of Diego. Sure, he's portrayed as an extreme bleeding heart stereotype, but it's not as if Nascimento is any less over the top. In a way it makes these characters so pure and iconic that it helps drive home the message that right and left need to work together to deal with the real threats to their country – politicians. Some things are just universal, I guess.
Brazil submitted this as their official entry in the Academy Awards “Best Foreign Language Film” category last year, which can only be described as a “Hail Mary”. But while ELITE SQUAD: THE ENEMY WITHIN never had a chance at winning an Oscar, it is nonetheless a solid entertainment. 3 out of 4 stars.
Posted by Bob Ignizio at 12:01 AM