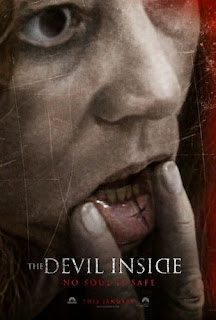 If you were even halfway curious about the demon schlock faux-doc THE DEVIL INSIDE, you’ve no doubt caught wind that the critical reception makes that scene from THE ACCUSED look like Disney on Ice. I don’t know how much I can add to the conversation. Obviously, the movie isn’t any good –the scares are dollar store knockoffs of familiar horror fare, the character work is lazy and the ending is a car wreck. At the same time, my expectations were so low, and the dull incompetence with which it bungles through paranormal clichés will feel so familiar to even casual fans of modern horror, that the usual critical vitriol or snarky rejoinders would represent effort wasted on a film that fails on the least auspicious terms - without trying to succeed. It’s unremarkably bad.
Like THE BLAIR WITCH PROJECT, which can’t help but find its name associated with every loud, jittering found footage flick best boozed or snoozed through, THE DEVIL INSIDE is about a couple folks who are making a documentary. The cameraman, Mike (Ionut Grama), is I think some sort of filmmaker following his subject (friend?) Isabella’s (Fernanda Andrade) trip to Italy to visit her mother, an asylum-bound murderess whom Isabella has only just found out committed her triple homicide while being exorcised by a local priest. Once the two arrive, they meet a couple rogue priests who perform under-the-table de-evilings on folks like Isabella’s mom, who google-eye their lives away in medicinal catatonias because the church has deemed them not-quite-possessed-enough to warrant official ecumenical intervention.
That’s right - as if the Catholic Church didn’t have enough PR conflagrations to flick holy water at, along comes THE DEVIL INSIDE with allegations that the Vatican is letting scores of innocents go un-exorcised as their souls turn into flophouses for foul-mouthed (and always, for some reason, multi-lingual) hordes of demon squatters and their key parties of the damned. Horror movie-wise, it’s not a terrible premise; if the primary scare factor of a good possession movie is the notion that the viewer or his or her loved ones could potentially fall victim to the same Satanic monkeyshines as the possessed, thereby, requiring exorcism, suggesting that exorcisms are rarer and harder to initiate than portrayed in the movies is a serviceable conceit for, well, a movie. (THE EXORCIST – a great exorcism movie – succeeds because Friedkin knew better than to assume that the prospect of demon possession would scare everyone in the audience; for the earthbound rationalists, he threw in the pain, mystery and horror of undiagnosed illness and then-modern high-tech medical procedures.)
The problem here is that director and co-writer William Brant Bell (STAY ALIVE) thought his was a fantastic idea, and tries to hang a whole film around it. Worse, he’s so eager to get to the limb-cracking, tongue-waggling possessions, he forgets that a genre filmmaker need only explain the established rules if he intends to break them (Bell does not), whereas, characters in any story, no matter how familiar, need to be developed on their own terms. Rather than even a brief bit of interpersonal back-and-forth between Isabella and Mike, Bell loads the first act of the film with “expert” testimonies regarding Isabella’s mother’s crime and mental state (especially annoying, as the momma plot is unceremoniously dumped three-quarters through) and, even worse, tired procedural blather about the process for exorcisms, which, given the number of uncreative exorcism movies that precede this one, is about as necessary and surprising as an instruction manual for mittens. As a result, the character development is limited to obnoxious reality television-style confessionals where, at various points, characters happily speak and spell their emotional misgivings to the camera as if it were some sort of mechanical therapist or android bartender. For her part, Isabella likes to wander around lamenting that her mother’s condition “defines” her. I guess that’s one way to develop a character.
A word on Cameraman Mike: Hate. I hate Mike. He randomly inserts himself into the “documentary” like he’s friggin’ Werner Herzog or something.
It doesn’t take a film critic to tell you that the ending just plain sucks. Without saying too much, it aspires to ambiguity, but mistakes stopping a movie for ending a movie, and then, by way of a justification, reminds the audience that this is a badass found footage film… not, like, one of those Squaresville story movies. If I recalibrate my expectations and concede that modern exorcism cinema has less in common with the ‘70s psychological freak-out than the ‘80s slasher flick, substituting increasingly over-the-top possessed antics for the latter’s ante-upping hack and stab executions, THE DEVIL WITHIN ranks just short of mediocre… And for that, I’ll grant it one snarky rejoinder: I’d like to applaud all the light waves involved in the production for actually finding the energy to stumble into the camera lens. (1 out of 4 Stars)
Posted by Matt Finley at 12:13 AM