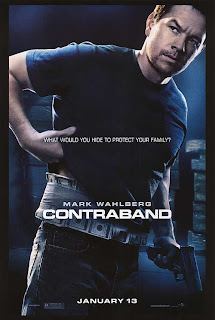 The Icelandic film REYKJAVIK-ROTTERDAM was a big hit in its native country and won a number of awards in the Icelandic equivalent of the Oscars to boot. In an interesting twist, the star of the original version (Baltasar Kormakur) is the director of this American remake. That's pretty much the only interesting thing about CONTRABAND.
The plot centers on Chris Faraday (Mark Wahlberg), an ex-smuggler renowned for his clever methods who went straight after marrying Kate (Kate Beckinsale) and having a couple of kids. When his wife's brother Andy (Caleb Landry Jones) botches a smuggling job of his own, Chris has no choice but to do one last job to help Andy make good with his less than understanding employer. Ben Foster plays Chris' shady friend and former partner Sebastian, J.K. Simmons is a gruff ship's captain, and Giovanni Ribisi plays a thug with a ridiculous accent.


I haven't seen the award-winning original version, but I can only assume it must be better than this mediocre thriller. Most of the film is blandly competent, but there are a few things that grated on me to the point that the movie crossed the line from mediocre to bad. Usually in caper films, half the fun comes from how seeing how cleverly constructed the criminal scheme is. We're told that Wahlberg's smuggler is a master in his field, so one would expect that to be the case here. But instead of a brilliantly constructed plan, for the most part Wahlberg just stumbles his way through. The few elements of his scheme that are thought out ahead of time are hardly the stuff of an OCEANS caper.
Not that any of the other characters appear to be any more capable. How any of them rose to their positions of criminal power and/or renown is beyond me. Most notably in this regard is the Panamanian crime lord who forces Wahlberg to accompany him on what must be the most poorly thought out armored car heist of all time. It's almost an insult to the hard working criminals of Panama to show this guy as being one of the top dogs.
Then there's the complete waste of Kate Beckinsale's talents. Fans of the actress can see her kicking vampire and werewolf ass in the fourth installment of the UNDERWORLD series later this month, but in CONTRABAND she is little more than a prop. Her character is in the film solely to be put in danger and motivate the hero. Such being her function, no one felt the need to write an actual part for her to play; she is merely “wife of hero” and has no defining attributes beyond that.
If you're tastes aren't especially discriminating and you just want to watch a professional looking crime thriller with a decent cast, you might experience something in the ballpark of satisfaction from watching this movie. There's absolutely nothing about the film that stands out, and you'll most likely forget you ever saw it within the week, but if you're really bored and want to see a movie on the big screen, this is one. 2 out of 4 stars.
Posted by Bob Ignizio at 12:01 AM