'Connect' with trout fishing at the Cleveland Museum of Natural History

[CONNECT screens Friday February 3rd at 8:00 pm at the Cleveland Museum of Natural History. There will be a 6:30 pm cocktail reception prior to the film. Filmmaker Jim Klug and other trout fishing experts will be in attendance.] 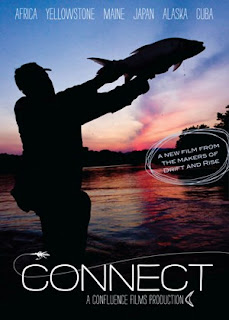 Back in 1982 there was an art-house epic from called THE TROUT. Director Joseph Losey’s final feature, it starred Isabelle Huppert as a hottie from the French countryside who goes through a variety of love affairs and upward career moves, often in combination. Why is it called THE TROUT? I seem to remember a critic or plug-writer at the time, no doubt paid more than me, who rhapsodized about how she swims through life and men like a trout through water, or something like that. So maybe that’s why it’s called THE TROUT. Or…maybe it’s because at the beginning she works on her family’s TROUT FARM and by the full-circle end of the movie she’s working again at another damn TROUT FARM! Arrgh! Aaargh! (Sam Kinison impersonation; most of you are too young to remember him)
Anyway, I always felt a little bad that some patrons might have shown up for THE TROUT in some snooty Woody Allenesque cinema dive in Greenwich Village in their waders and rods and reels expecting to get some great fly-fishing tips, only to be subject to hours of psychosociosexual French drama. That can’t happen (I don’t think) at the Cleveland Museum of Natural History on Friday, February 3. That’s when the Museum’s resident Trout Club welcomes nature writer-photographer-filmmaker and fishing guide Jim Klug, from .
Rather than just sleep his way to the top like a French melodrama heroine, Klug and his associates in the outdoor-game arena have produced films such as DRIFT and RISE, about extreme fly-fishing in scenic locations around the world. His latest, CONNECT, goes from to Africa in spotlighting some of the rarest of river monsters, such as the tigerfish and the pike, and the fish-obsessed folk who pursue them.
The evening costs $10 for CMNH members, $15 for nonmembers and only $5 for high-school students. Tickets can be reserved by calling 216-231-4600 ext. 3278 or registering online here. For more on CONNECT go online to www.confluencefilms.tv.
Posted by Charles Cassady Jr. at 12:37 PM