Blackthorn (January 6th and 7th at the Cleveland Cinematheque) 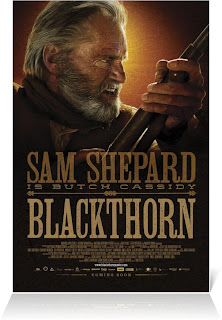 When a legend dies, there are always those who will dispute the official version of events. In modern times this sort of thing tends to spring up around rock stars or other celebrities who meet untimely ends. In the wild west era, it was outlaws like Butch Cassidy and his partner The Sundance Kid. The partners in crime supposedly checked out during a Bolivian shootout in 1908, one of them ultimately killing his wounded partner and then himself. Just as with Elvis, though, there are many who claim to have seen Butch years after his death. In this case, the notion isn't entirely implausible, either, as there has never been any conclusive evidence that Butch and Sundance were the outlaws who died in the shootout. This premise is the starting point for BLACKTHORN.


It's 1928 as the film begins and the old west has all but faded away, though its easier for some vestiges to hang on in less industrialized locales like Bolivia. For the past two decades, Butch Cassidy (Sam Shepard, and in flashbacks Nikolaj Coster-Waldau) has lived a quiet, peaceful existence under the name James Blackthorn raising and selling horses. That changes when he receives news regarding the boy who most likely is his son, and if not is the son of his dearest friend the Sundance Kid (Padraic Delaney) and the woman both of them loved, seemingly with little jealousy (Etta Place, played by Dominique McElligott).
The news spurs Cassidy to return home and care for the boy, but then there's that old saying about going home again. The aging outlaw gets sidetracked by an encounter with Eduardo (Eduardo Noriega), a mining engineer who is being pursued by a posse for stealing a sizable sum of money from the owner of the mine he was employed by. The two men get off to a rocky start, in no small part due to Eduardo causing Cassidy's horse to run off carrying all the money he had planned to use on his trip. The prospect of sharing in Eduardo's take manages to smooth things over somewhat, and the two strike up an uneasy alliance.
In one of the letters Cassidy writes to his probable son early on, he tells the boy about the importance of friendship. In flashbacks, we see this is not just talk. Butch cared about Sundance as much if not more than he did for Etta, and the absence of a friend like that has left an emptiness in him. Butch is so desperate to fill that emptiness that his judgment becomes clouded when he starts to believe Eduardo might fill a similar role. This leads to a twist in the third act that feels completely natural and in keeping with the film's themes.
BLACKTHORN is a damn fine “end of an era” western with a strong cast, solid story, and gorgeous cinematography, including some beautifully barren shots of Bolivia's salt flats. Bigger name stars would likely have gotten the film on more theater screens, but wouldn't necessarily have made for a better movie. Director Mateo Gil hasn't directed a feature film since 1999's NOBODY KNOWS ANYBODY, and is perhaps best known as writer and second unit director on most of Alejandro Amenábar films including OPEN YOUR EYES and THE SEA INSIDE. Here he proves himself to be an excellent filmmaker in his own right. 3 1/2 out of 4 stars.
Posted by Bob Ignizio at 12:01 AM