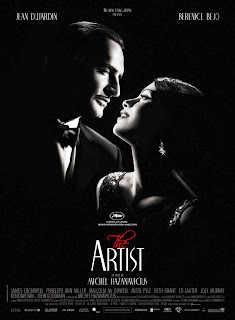 Despite all the critical praise it has received, I half expected THE ARTIST to be just another fun but gimmicky exercise in replicating the look and techniques of an earlier era of film. That's certainly not unreasonable given the track record of director Michel Hazanavicius and his stars Jean Dujardin and Bérénice Bejo. They previously took on the eurospy genre of the sixties with the spot-on spoofs OSS 117: CAIRO, NEST OF SPIES and OSS 117: LOST IN RIO. While both of those films are enjoyable, their main purpose is to look and feel like they were made in 1963 and have a few laughs about the attitudes and tastes of that era.
Nothing wrong with that; but THE ARTIST is something more. Once again Hazanavicius replicates a bygone cinematic era, this time the waning years of silent film. Rather than that being the entire raison d'être for THE ARTIST, however, the technique is used in the service of telling a heartfelt, funny, and hugely entertaining story.


Dujardin plays popular silent movie star George Valentin as a pompous ass who is nonetheless kind of likeable. At the premiere of his latest movie, pretty young flapper Peppy Miller (Bejo) accidentally stumbles onto the red carpet while trying to retrieve her purse. Valentin hams it up with the girl, and the two wind up front page news. Miller tries to parlay her sudden fame into getting work as an extra, but Valentin's producer (John Goodman) is mad because the girl took press attention away from the actual movie premiere. Thanks to Valentin, however, she gets a shot, and in a short scene the two shoot together, there is an undeniable chemistry between them.
As time goes by, silent films give way to the talkies and Miller's star rises while Valentin's falls. A combination of pride and fear of talking onscreen keep Valentin from adapting, and his career, finances, and marriage collapse in short order. A rift also opens up between Valentin and Miller when she gives some harsh quotes to a reporter without thinking. Valentin's faithful dog Jack (Uggie) and loyal manservant Clifton (James Cromwell) continue looking out for him, as does Peppy, who still cares about the man who helped her on the road to success. But even they may not be able to save Valentin from himself.
As with the OSS 117 films, technically THE ARTIST gets everything right. The movies within the movie look like authentic relics of the twenties. The “real world” segments are still in silent black and white, but they don't try to replicate silent techniques as much, which works just fine for me. There are a number of standout sequences, but I think the best is Valentin's nightmare about the advent of the talkies, a rare instance of the film using sound other than the music track.
But forget all the critical dissection, this is just a great movie. First and foremost THE ARTIST works as pure unadulterated entertainment of the finest sort. It has drama, it has comedy, it has romance, it has suspense... what more do you want? It also serves as a love letter to the silent era and shows that the storytelling techniques used before sound still work just fine today. In fact, as one who has watched a number of silents recently, I find overall that the best silent films tend to look less dated and be more visually innovative than most early talkies, which due to the primitive sound recording technology of the time were often very stagey.
Of course just as there are those who refuse to watch foreign films with subtitles, there are those who won't even watch black and white movies, let alone a silent one. There's not much I can say to those folks other than you're missing out on the best movie of 2011 (although for Movie Blog purposes I'll be counting it as a 2012 release, since it only just opened here.), not to mention an awful lot of amazing films from the past. 4 out of 4 stars.
Posted by Bob Ignizio at 12:01 AM