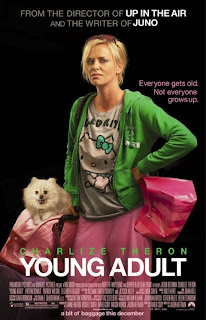 For some people, the time spent in high school really was the best years of their lives. The question is, if you've already peaked as a teenager, where do you go from there, especially when the future you saw for yourself hasn't materialized? That's the issue facing Mavis Gary (Charlize Theron) in YOUNG ADULT, the new anti-romantic comedy from the JUNO team of writer Diablo Cody and director Jason Reitman.
Mavis has been successful enough in her career as ghost writer for a series of high school-themed novels to move away from her hick town to the big city of Minneapolis, but little else about her life could be termed a success. Her marriage ended in divorce, she spends most of her free time watching reality TV, and now the book series is being canceled. But rather than look for a new direction in life, Mavis turns to her past. Specifically her ex-boyfriend Buddy (Patrick Wilson). The fact that Buddy is happily married and his wife Beth (Elisabeth Reaser) has just given birth to their first child seems only a minor inconvenience as Mavis heads back home determined to get her man no matter what the consequences.
Ethical issues aside, there's no real indication that Buddy is interested in rekindling his old romance with Mavis. Mavis is used to getting what she wants, though, and delusionally forges ahead. Looking on with a mix of bemusement and horror while half-heartedly trying to dissuade Mavis from this course of action is Matt Freehauf (Patton Oswalt). Matt used to have the locker next to Mavis, but she barely could be bothered to notice him back then. Matt's claim to high school fame was as the “hate crime” kid who took a severe beating from some jocks who thought he was gay. He wasn't gay, though, so even that dubious distinction got taken away from him. Further fueling Matt's bitterness, Mavis' cousin became the school's “popular cripple” for maintaining a positive attitude about being in a wheelchair.
I like that YOUNG ADULT makes us feel conflicted about Mavis. There are aspects to the character that are likeable, but she definitely isn't what most people would call a good person, and does very little to earn audience sympathy. I imagine most viewers will be rooting for her comeuppance or hoping that she undergoes some kind of transformation. Instead we get a more ambiguous, messy resolution. Mavis does learn a few lessons and grow as a person to some small degree, but there isn't any pat, feel-good moral to the story.
JUNO tended to divide audiences strongly between those who found the film charming and funny and those turned off by Cody's snarky, slang-heavy dialogue. YOUNG ADULT takes a different approach, with its characters speaking in a more natural and adult fashion. Cody still throws in some hipster elements, like Beth playing in an all-mom rock band called Nipple Confusion and Matt's Black Flag t-shirt, but it feels appropriate to the characters (as opposed to Juno's unlikely affinity for sixties exploitation films, for instance). It also helps that unlike Reitman's previous films, there's no BIG ISSUE the movie is trying to tackle; it's just a human story, with the humor coming naturally from the characters and situations.
Some people will probably find Theron's character too off-putting to enjoy the film, but personally I thought YOUNG ADULT was genuinely funny and relatable. It's also more consistent in tone than Reitman's previous film UP IN THE AIR, where Anna Kendrick's sitcom-y character and performance felt out of place with the more realistic turns by leads George Clooney and Vera Farmiga. And speaking of performances, Theron and Oswalt give two excellent ones here. Expect some awards talk, for what that's worth. 3 1/2 out of 4 stars.
Posted by Bob Ignizio at 12:01 AM