Silent Souls (December 9th and 10th at the Cleveland Cinematheque) 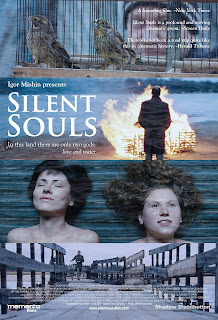 The tonal antithesis of your typical road trip flick, Aleksey Fedorchenko’s 2010 film SILENT SOULS (Oвсянки) offers a contemplative and, at times, joyful rumination on mortality and lose, not just as they relate to the human form, but also to ritual, tradition and all the other glorious cultural semaphore that was once performed by living hands. With a fervent devotion to half-remembered pre-Christian rites, and an undying faith in magic, the film leads viewers down desolate highways connecting one drab village to the next, as characters act out a loving tribute to a lost and ancient Russia that, in the film’s most successful moments, feels almost as solid as the ubiquitous pavement that was rolled out in its wake.
Based on a novella by Denis Osokin, who also penned the screenplay, the movie follows two friends, Aist (Igor Sergeev) and Miron (Yuriy Tsurilo), as they travel from the small town of Neya to the banks of the Oka River, where Miron will cremate the body of his deceased wife, Tanya (Yuliya Aug). The film is narrated by Aist, and interspliced with Aist’s reflections on both his childhood and his and Miron’s Meryan heritage, the rituals of which guide the story as the men shepherd Tanya’s body to its final resting place. As the friends move from one ritual to the next, the movie contemplates how a person’s cultural heritage is more than merely one disparate building block of a larger life, but is one of the raw materials from which every brick of identity is forged. One Meryan tradition, for example - “smoking” - demands that a widower share explicit and joyful memories of he and the deceased’s former sex life. In exercising this ritual, Miron reveals a host of personal domestic practices, including a proclivity for administering vodka baths, which are themselves echoed in the steps of the funeral preparation.
To fully appreciate SILENT SOULS, it is important to understand that, in actuality the Meryans, an ethnic sub-group of the Volga Finns, were assimilated into the dominate Christian culture of Russia during the middle ages. While descendants of several Volgaic groups do exist in modern Russia, the Meryans are extinct, and have been for centuries. Though dressed in the banal accoutrements of the everyday – cars and factories and shopping malls – the unspoken anachronism of the characters’ identity makes SILENT SOULS a fantasy, a magical and sad fish-out-of-water (here an apropos cliché given the significance that Meryans place on the rivers) tale that never fully tips its hand to the fact that, at its heart, it's a ghost story, where the ghost is a forgotten way of life. What Aist, and the film, are desperate to know is what happens to a culture when there isn’t anyone left alive to perform its rituals? When the last Meryan falls and rots without being cleansed and burned and committed back to the water? Does a culture die off along with its practitioners?
For a film that’s tone is achieved through equal parts melancholy and reverent mystery, the answer it discovers is surprisingly optimistic.
One of the best things about SILENT SOULS is that it manages to both invoke and pay tribute to an older age without ever wallowing in false nostalgia or soapboxing about the shortcomings of modernity. This isn’t to say that its portrayal of contemporary Russian living is kind – the factories and houses flake and peel, the roads are anemic, and the only two places crowded with contented Russians are a sterile big box store and a mall food court. Still, the film never draws false battle lines across history to setup an ingenuous conflict of Then vs. Now – it merely acknowledges time as wild, stoic and unstoppable. Remake the film in 500 years, and the truest approach might mourn the sites of bygone factories in the same way that today’s Aist grieves over the ruins of ancient settlements. The film is a reverie to the erased, with an anxious twitch at the sight of a swiftly oncoming horizon.
It’s also, of course, a document. Through fiction, Osokin has brought two Meryans back, trapped them in the modern world, and injected them into viewers’ consciousness. It acknowledges that, while culture can’t ever be successfully separated from men and women, and still remain dynamic or any more kinetic than a carving on a museum shelf, through art we can conjure a man - a vessel for culture to inhabit, a mouthpiece through which memory can speak. If a strip of celluloid can assign the full weight of human experience to a single beam of projected light, so too can it return vital mass to the receding shadows of history. (3 1/2 out of 4 stars)
Posted by Matt Finley at 12:01 AM