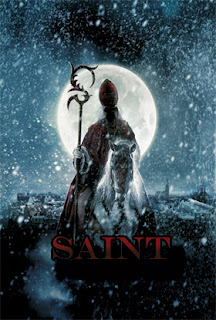 Those of you who’ve read David Sedaris’ hilarious 2002 Esquire piece, Six to Eight Black Men, are well apprised of the horror movie potential of Netherland’s Santa Claus-analog (precursor, really, but good luck getting any American to acknowledge Kris Kringle’s green card status) Sinterklaas – a former Catholic bishop who, with the help of a half-dozen Moorish slaves, takes a yearly jaunt around Western Europe, lavishing gifts upon the bona fide nice while beating or kidnapping the certified naughty. Said potential is fully realized in veteran Dutch horror director Dick Maas’ (DE LIFT, AMSTERDAMNED) SAINT (Sint), a nasty, darkly comedic riff on the Sinterklaas legend that’s part slasher flick and part X-Files-sorta-ish conspiracy thriller. Though the plotting is scattered and the story unfocused, the film would make a worthy last-minute addition to any Christmas movie marathon – perfect for the 2:00am boozy nog haze between SILENT NIGHT, DEADLY NIGHT and bed-nestled sugar plum visions.


For an 85-minute gore show about a killer Santa Claus, there’s a whole lot of crap that goes on in SAINT. Though substantially robbed of screentime by a host of attractive teenaged knife-fodder, the film’s protagonist is a grizzled cop named Goert (Bert Luppes) who, as a child, witnesses the slaughter of his family at the hands of the Zwarte Pieten, or Black Peters, Sinterklaas’ slavish holiday minions. In the decades he spends planning his revenge, Goert discovers that the real Sinterklaas was actually a disgraced Bishop turned pirate who, along with his pirate buddies, sacked Amsterdam on December 5, 1492, and was subsequently burned to death aboard his ship by a mob of rightfully P.O.ed Amsterdamians. Now, whenever there’s a full moon on December 5th (St. Nicholas Day – the Dutch Christmas), the ghosts of Klaas and the Zwarte Peiten terrorize the inhabitants of the city and kidnap kidlets, a fact which the government has covered up for centuries. SAINT takes place during the first full-mooned St. Nicholas Day since the demise of Goert’s family in 1968. Phew.

For such a delightfully straight-to-video premise, SAINT is a slick little film, and the kills – mostly a rash of creative stabbings and dismemberments, with a couple car hits and explosions thrown in for good measure – are solid. The Sinterklaas legends is rife with visual potential -a huge honkin' boat and big-ass horse, not to mention the gang of six to eight black men (whose dark complexions Maas writes off as a result of hellfire and mayhem rather than heritage and melanin) - and SAINT takes full advantage of all of them. There’s no arguing… these ghost pirates are twice as swashbuckling as the wispy buccaneers of John Carpenter’s THE FOG, and thrice as creepy as the Dunce Macabre Ghost Hunters outtakes that man the Black Pearl. Particularly bodacious is an extended chase sequence in which cops on the ground pursue a horse-mounted Sinterklaas as his steed gallops along the rooftops of the city.

Of course, it wouldn’t be an iconoclastic Christmas film without a few tongue-clucking admonishments tsked toward the capitalist transubstantiation of good will into greedy gimmes. And Maas gets in a few limp jabs, mostly by way of repeated emphases on the economic status of various characters (as well as a couple outright grumby grumbles at the commodification of the holiday) . More evocative, though, is the notion of the ongoing bureaucratic cover-up, which, it’s implied (though never fully explained), requires a collaborative effort across every level of municipal government to airbrush the true significance of the occasional ghostly murders that upend full-mooned December 5ths. The rug under which the carnage is swept? Staged disasters and serial killer frame-jobs. They use the banal disorder of grim realities to cover for supernatural chaos in the same way that the adult citizenry uses joyful fictions about a magical Sinterklaas to distract children from the crushing reality of disasters and serial killers.

It’s a shame that the film doesn’t explore these ideas any further, especially given that there is a woefully underused group of teenaged characters – teenagers being a cultural age group that are in bitter transition between the discovery of cultural fictions handed down by adults and their own imminent obligation to perpetuate those very same gingerbread-and-peppermint fabrications. Then again, that wouldn’t leave much time for Sinterklaas to decapitate policemen with his bladed death staff. (3 out of 4 stars)
Posted by Matt Finley at 12:01 AM