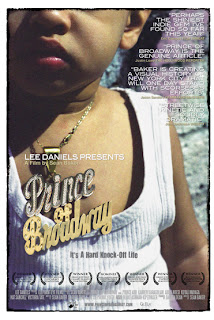 Writer-director Sean Baker teamed with producer-director Lee Daniel, the latter best known for PRECIOUS (or PRECIOUS SOMETHING SOMETHING SOMETHING SOMETHING SAPPHIRE; I really should be hanging out with Seth MacFarlane, in an alternate universe) to make PRINCE OF BROADWAY. It's an improv-heavy street drama telling another unglamorized, urban NYC drama set amidst the city's ethnic crazy-quilt, this time the seamy side (as opposed to the seam-y side) of the Garment District. The film played the Cleveland International Film Festival, but otherwise home-video (on which it loses nothing, fortunately) is your chance to see it.
Lucky (Prince Adu) is an illegal African immigrant who makes a subsistence living as an off-the-books employee of Levon (Karren Karaulian), an Armenian-Lebanese immigrant running a tidy but crooked storefront boutique in Manhattan's Flatiron neighborhood. Out of the backroom Levon sells counterfeit fashion accessories from Asian sweatshops (as opposed to what, the real brand expensive fashion accessories from Asian sweatshops? Just wondering...). Lucky, as Levon's general factotum, puts out the word in the 'hood about Levon's latest merchandise.
Lucky is in a serious relationship with an upscale lady, but complications arise when his Latina ex-girlfriend reappears - with a baby she claims belongs to Lucky. Left with the infant, the reluctant father gets a crash course in single-daddyhood and diaper-cleaning (and worse; I just hope that was just melted chocolate the prop department used. Or was the infant actor, like everyone else here, also way into Method for the role?).
Meanwhile Levon's marriage to a hot young club-hopper wife disintegrates; she's an American girl whom he married for a green card, and she's tired of domesticity, even though Levon took it for granted that their arrangement was a lifetime deal. She walks out, leaving Levon hurt and in a vengeful rage. Lucky's baby crisis turns into something of a catalyst and a turning point that impacts both men, each immigrants in their own pursuit of happiness.
The filmmakers render the tale with a hand-held, docu-dramatic camera and streetwise and profane dialogue, largely unscripted by a cast of all first-timers freestyling away. Result is a film of rare intimacy that hits its marks well. Though the deliberately rough-edged style really takes some getting used to, eventually the volatile but sympathetic leads capture and hold the attention. PRINCE OF BROADWAY makes one think that somewhere in movie heaven those pioneers in American seat-of-your-pants neo-realism, John Cassavetes and Peter Falk, are looking down on the project and smiling. Even though it took the afterlife Cassavetes something like eight hours of film footage, preceded by eight hours of Method workshops, to get the moment right. And even in heaven he went way over budget and had to make it up spending some time in hell acting in lousy horror quickies, just like he had to when he was alive.
Please Daniels/Baker, tell me that was chocolate. There's been too much real excrement on screens this year. (3 1/2 out of 4 stars)
Posted by Charles Cassady Jr. at 12:01 AM