[THE MAN NOBODY KNEW: IN SEARCH OF MY FATHER, CIA SPYMASTER WILLIAM COLBY screens Friday December 9th at 7:30 pm and Saturday December 10th at 9:30 pm at the Cleveland Cinematheque.] 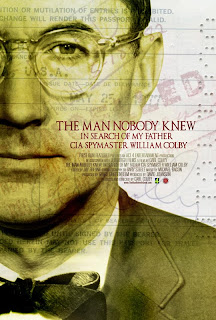 THE MAN NOBODY KNEW: IN SEARCH OF MY FATHER, CIA SPYMASTER WILLIAM COLBY belongs to that category of documentary in which a son tries to make sense of the life of an ambiguous or emotionally distant father (Nathaniel Kahn's MY ARCHITECT is another). Carl Colby, son of former CIA director William Colby and an experienced documentary filmmaker, has assembled an impressive collection of interviews and historical footage to solve the mysteries that lingered when the body of his father was found in 1996. Retired from the CIA, the 76-year-old Colby, a skilled boater, had apparently drowned in a canoe accident. An impressive roster of interview subjects, Zbigniew Brzezinski, Donald Rumsfeld, Brent Scowcroft and journalists Bob Woodward and Seymour Hersh, lend perspectives on Colby, “The Company,” and the CIA's role in the world.


Some of the most interesting insight comes from the younger Colby's interviews with his mother, the dignified and articulate Barbara Colby, who narrates the history of their family. We see Bill as a young World War II army officer, eager for action, and as an early recruit in the Office of Strategic Services (OSS), the forerunner to the CIA. He was part of a select force that parachuted behind enemy lines, earning a Silver Star; he led a sabotage mission in Norway to thwart the Germans by destroying railway lines. Carl Colby says his father was “the coolest character I ever knew.” His father then graduated from Columbia Law School, practiced law in New York, then moved to Washington to work for the National Labor Relations Board.

Taciturn by nature, Colby was well suited to the spy game. The true nature of his work was unknown to his family, even his wife, who says she did not know when it was that her husband moved from the NLRB to the CIA. Much of Carl's childhood was spent in Rome, where his father was stationed in the 1950s, allegedly working for the State Department but actually directing covert operations to support the anti-Communist Christian Democrat party. A devoutly Catholic family, the Colbys relished their privileged life in Rome and close connections with the Vatican.

They moved to Saigon in 1959, at the cusp of the civil war in Vietnam and the United States' disastrous involvement. Colby, under a State Department cover, was in charge of supporting the Diem government, and the family became close with the president, his brother and their families. Diem was an autocratic U.S.-installed Catholic leader known for persecuting Buddhists. Colby's mission was to help fortify Vietnamese citizens against the Viet Cong insurgency. The Colbys were shaken after Diem's assassination in an apparently U.S.-backed coup in 1963. After a relatively idyllic stay, the Colbys left Saigon.

Vietnam would continue to haunt Colby. On a return assignment in 1968, he headed the notorious Phoenix Program, a counter-terrorism effort that became a program of indiscriminate torture and murder of suspected terrorists (often just hapless people hauled in for a cash bounty). Under Phoenix, more than 40,000 Vietnamese – many of them women – were tortured and killed, and the details of the killings are quite grisly. In an article on Phoenix, Noam Chomsky quotes K. Baron Osborn, a veteran of a covert intelligence program in Vietnam: “I never knew an individual to be detained as a V.C. suspect who ever lived through an interrogation in a year and a half, and that included quite a number of individuals.” During confirmation hearings in 1971 for the CIA director position, Colby denied that Phoenix was an assassination program, and claimed that most of those killed were “members of military units or while fighting off arrest.” According to Chomsky, those claims are “contradicted by all nonofficial testimony on the subject.”

The movie suggests that Phoenix strayed from Colby's original intentions and became a monster; the claim deserves more thorough, objective scrutiny. What is certain is that Colby remained troubled by the outcome in Vietnam. In Lost Victory, a book he wrote after retirement, he argued that South Vietnam could have survived if the U.S. had continued its support after the Paris Peace Accords.

This fascinating, richly detailed documentary is both a history of Colby's career and a psychological journey in which Carl tries to discover who his father was and what his culpability was for the bloodbath of Phoenix and for other dark exploits of American intelligence. “My father lived in a world of secrets,” Carl says in voice-over narration. Barbara Colby knew so little about her husband that his announcement that he wanted a divorce came as an utter shock. (Colby was later remarried, to a CIA colleague.) By film's end, Carl's admiration of his father has curdled into bitterness: “I'm not sure he ever loved anyone.” Colby was a shadowy, inscrutable figure, even for a career spy.

Perhaps the most interesting chapter of Colby's life came during his rocky tenure as CIA chief was when he testified before Congressional investigative committees with unprecedented candor about the activities of the CIA – displaying the so-called “Family Jewels.” The film speculates that Colby's frankness was an attempt, rooted in his Catholicism, to expiate his (and the CIA's) sins. His well-intended openness alarmed Washington's elites, and on the advice of Henry Kissinger, President Gerald Ford replaced Colby in 1975 with George H.W. Bush, a man who presumably knew how to keep a secret.

Did Colby have a heart attack, as the coroner ruled, during that fatal canoe trip? There is speculation that he was murdered or committed suicide. Though not mentioned in the film, Carl Colby has said that a fortnight before his death, the elder Colby called him to ask forgiveness for being an absent father to Carl's sickly sister, Catherine, who died in 1973. When Colby's body was found, a picture of Catherine was in his pocket. 3 1/2 out of 4 stars.
Posted by Pamela Zoslov at 12:01 AM