Happy, Happy (December 14th and 16th at the Cleveland Cinematheque) 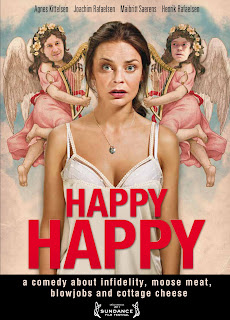 Intended as an edgy black comedy, Anne Sewitsky's HAPPY, HAPPY (Sykt lykkelig) is obvious, forced, and just plain unfunny. The plot concerns a smug family of white urban liberals (complete with adopted black son) heading to the bucolic countryside to rent a house from salt of the earth country folk, easily translated to a Red State/Blue State dynamic for the inevitable American remake. I can already picture Neil Labute in the director's chair after first rewriting the script just enough as to remove what little likability there is in the characters.


The city slickers are the good natured Sigve (Henrik Rafaelsen), his dyspeptic wife Elisabeth (Maibritt Saerens) and their quiet adopted son Noa (Ram Shihab Ebedy). Elisabeth makes her disgust with her new home apparent from the beginning, hinting at further problems lying just beneath the surface of a seemingly perfect marriage. But the country folk – manly man Erik (Joachim Rafaelsen), genial but insecure housewife Kaja (Agnes Kittelsen) and their model plane obsessed little boy Theodor (Oskar Hernæs Brandsø) seem so nice enough first that they start to win Elisabeth over. Of course this family has their share of issues as well, and when everyone's problems start to intermingle it isn't long before things go downhill.
I mention Labute as a likely candidate for an American remake because the film's misanthropic view of humanity in general and male/famele relations in particular is very much in line with his usual themes. Add to that a dash of repressed homosexuality ala AMERICAN BEAUTY and an extremely uncomfortable subplot about the two children playing a game of master and slave, and you have HAPPY, HAPPY. All of it feels completely contrived and unrealistic, especially the “Christmas Miracle” ending. And then there's the barbershop quartet singing American blues and gospel songs to punctuate various plot points, which is far too cutesy to be effective. The film is well made and the performances are fine, but that can't salvage a film that was a mess from its conception. 2 out of 4 stars.
Posted by Bob Ignizio at 12:01 AM