The Emperor's New Groove (December 9 at 7, 9 and 11 p.m. at the CWRU Film Society, Strosacker Auditorium) 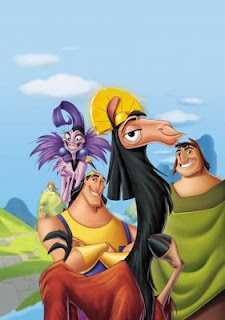 Like something out of Rankin/Bass' Island of Misfit Toys, THE EMPEROR'S NEW GROOVE is an oddball also-ran from Disney's Magic Kingdom of animation, a featherweight burlesque from 2000 that looks like it was doodled out hastily as a goof, take it or leave it. The anything-goes sense of humor and sitcom-based lines have equal appeal to children and grownups, so there's that. Many cartoons before or since can't even boast that much.


Despite the title (and Disney's tendency to adapt/mutate existing fairy tales and folklore) there's no debt to Aesop in the script. Setting is some quasi-Incan kingdom in old South America. Spoiled since birth, shrimpy Emperor Kuzco (voiced by David Spade) enjoys throwing his meager weight around and bullying peasants like burly Pacha (voiced by John Goodman), whose hilltop hut Kuzco plans to level to build his 21st-birthday hacienda. But scheming against Kuzco is his power-mad advisor Yzma (voiced by Eartha Kitt) and her musclehead assistant Kronk (voiced by Patrick Warburton). They try to poison the emperor and steal his fortune, but Kronk confuses potions and turns their lord into a llama instead.

Accidentally paired with Pacha, the quadruped Kuzco must learn humility and thoughtfulness as the bickering duo trek back to the palace and try to undo the spell. At one point even one of the characters shrugs and admit that not much of this makes any sense, which is kinda remarkable for a Disney cartoon feature (except Warner Bros. and Japanese cartoons have done that kind of self-referential satire for decades). Mercifully the moralizing about Kuzco's life lessons stays to a minimum, and despite songs by Sting on the soundtrack there are no sermons on saving the South American rain forests from Global Warming, hurrah! Most of the schtick comes on fairly fast, funny and smart, and Spade even quotes his old Saturday Night Live routines ("Buh-bye!") in salute to his aging gen-X fans. Goodman, for his part, does not reference back to his former live-action role as Fred Flintstone, though this is one of the more Hanna-Barbera-looking Disney 'toons of late.

A simplified drawing style - at least hand-wrought rather than digital - hearkens a little to the great Ralph Steadman, best known in this country for illustrations accompanying the hallucinatory writings of Hunter S. Thompson. I said a little - mostly in the skeletal Yzma, a Cruella deVille type whom singer-actress Kitt infuses with mad glee. Check down in the credits for a voice cameo by John Fiedler, the original Piglet from Disney's Winnie the Pooh adaptations.

The director is Columbus-born Mark Dindal, whose witty MGM-musical-spoof CATS DON'T DANCE went sadly overlooked by audiences when it was released in 1997. As for THE EMPEROR'S NEW GROOVE, it was deemed successful enough to spawn a direct-to-video sequel KRONK'S NEW GROOVE, but I can't say I've seen lots in the way of Kuzco theme-park rides or Yzma action figures or enchanted llama videogames. Which is perfectly fine by me. (3 out of 4 stars)
Posted by Charles Cassady Jr. at 12:01 AM