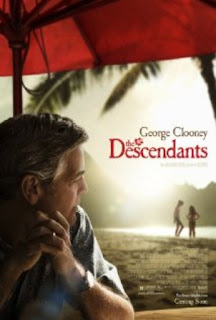 THE DESCENDANTS, okay, that's another live-action Marvel comic-book adaptation right? I think it's the one that teams up Hulk, Iron Man, Thor, Fly Girl (or was it Fishnet-Woman in a DC Infinite-Universes crossover?) and Captain USA, and they were always fighting against Kang the Conqueror, Dong the Destroyer or Alliteration-o the Annihilator. Right?

No, that's Defenders, I know. Still hard to acclimatize to the fact that as the end of the year draws nigh we actually get some grownup movies in the theaters, for Oscar cred. Many seem to star George "never again do Batman" Clooney, and THE DESCENDANTS is one of this year's. It's one of those most ill-regarded of genres, the Male Weepie, a type of movie that even the great Leslie Nielsen ever got around to spoofing. Chicks on girls-nite-out can have their TERMS OF ENDEARMENT and BEACHES; we guys get to occasionally watch Kevin Costner, Mel Gibson, Harrison Ford or Clooney take a hiatus from the actioners to bear up under the travails of trying to save their farms/families/dying jock teammates.


Setting is Hawaii, where Clooney is Herb, a hardworking lawyer and executor in a large family of mostly idlers who can trace their ancestry back to the island chain's first wealthy white settlers and colonists (thus today they're the Defenders-- I mean, the descendants). His early narration promises that while this place may look like a tropical paradise its inhabitants still have their share of misery and heartache, and the next 115 minutes strive, pretty persuasively, to prove it.

Herb's wife is gravely injured (offscreen) in a water-sports accident and lingers in the hospital near death in a coma, while Herb struggles with the biggest decision of his career, over whom to sell his family's remaining land, a pristine beach property. Development for tourism (oh, is the Recession over in this flick? It is Marvel science-fiction fantasy after all) promises to make everyone in Herb's family even richer, depending on how he cuts the deal.

But weighing on Herb also are his wife's failing condition and his two troublesome daughters, one a jailbait teen warehoused away in boarding school, the other a precocious young foulmouth in trouble at elementary school. Herb fears that they're both on the way to leading dysfunctional beach-bum (or worse) existences, despite - or perhaps because of - his non-doting parenting style. Then the eldest drops a bombshell on Herb that partially, if not wholly, explains her bad attitude: mom was having an affair with another man and was on the verge of divorcing Herb when the accident took place. Father and daughter do some detective work to track down mom's lover, a revelation that makes the upcoming knot of family business and bereavement even more complicated and painful.

As a tearjerker and an actor's showcase, DESCENDANTS gets the job done indeed. I believe it now, that things can be tough for old-money Hawaiians too. Though at least those individuals don't have to shovel snow, watch the Browns lose, have constant insulting reminders (mainly from me) of the LeBron humiliation, or weather a million other failures we Clevelanders suffer - see WELCOME TO COLLINWOOD, guest-starring Clooney, for more details. But the superstar leading man emotes with the finest of them, instilling in Herb a human-scale performance that's reassuring for most of the dads in the audience that the healing will begin and things will turn out okay, no matter how bad it looks.

(Still, every time I log onto an internet news page there's a picture of the latest supermodel to make the George Clooney Girlfriend draft pick; she's usually spilling out of a skin-tight dress, being escorted out of an airport for looking so damn smoking hot the air-traffic controllers keep getting distracted and crashing the planes. It's a real disconnect from Clooney's dramatics, all I'm saying)

There is a void in the dynamic though - the comatose mother, who remains a cipher throughout. Victim of a workaholic husband's neglect, or a spoiled adulteress and crummy mom who brought nothing but trouble to the household? The answer remains unclear, which is perhaps as it should be. But this empty silhouette in the picture just isn't as tantalizing the way it was for the never-seen hippie whose funeral takes place in THE BIG CHILL.

And while I'm bashing a total-pro job of a serious, mature picture, directed well by Alexander Payne, I'll even get a little annoyingly PC and say it bugged me that this is a movie set most vividly and expressly in Hawaii that's mainly about Anglo-descended people, rather than ethnic Pacific islanders. The natives get lip service here,...but come on, I think even BLUE HAWAII with Elvis, not to mention the BLUE CRUSH surf-girl spectacles, gave jucier roles to the original Hawaiians. PICTURE BRIDE, from the mid-90s, about life in old suger-plantation Hawaii...centered on the Japanese settlers. WTF? I know there must be a narrative about real, full-blooded Hawaiians out there, yet the only recent one that comes to mind immediately is Disney's LILO & STITCH. Now there's something for a man to weep about. (3 out of 4 stars)
Posted by Charles Cassady Jr. at 12:19 PM