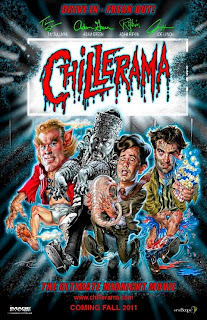 This four part anthology film seeks to pay homage to the drive-in movie experience in much the same way as Quentin Tarantino and Robert Rodriguez tried to pay homage to flea pit indoor theaters with their GRINDHOUSE. Only in CHILLERAMA, there are no big name directors, big name stars, or big budgets. Which, frankly, is as it should be. The kind of films both anthologies aim to recreate were made on the cheap, so anyone trying to emulate them should have to work under similar constraints. CHILLERAMA still doesn't come close to the kind of shoddiness seen in the films that inspired it, but it feels more in the true spirit of low budget exploitation films than GRINDHOUSE. None of which makes this the better film, sadly.


The concept holding the various segments together here is that we are witnessing a triple feature of “lost” films from the fifties and sixties at the soon to be closed Kaufman drive-in. Adam Rifkin (DETROIT ROCK CITY) turns in a fifties monster-on-the-loose tale about giant killer sperm called Wadzilla, Tim Sullivan (2001 MANIACS) serves up the gay horror/musical I Was a Teenage Were-bear, and Adam Green (HATCHET) gives us Hitler as a mad scientist in The Diary of Anne Frankenstein. The fourth and final story is Joe Lynch's framing sequence, which eventually turns into an all-out orgy of the undead.
Rifkin's segment is pretty much one dick joke stretched out for 30 minutes, but parts of it are fun in a juvenile sort of way. Sullivan's Were-bear falls short, though, mainly because the songs are bland and forgettable. Not to mention John Waters got far more humorous mileage out of the “bear” angle (for those who don't know, it's a gay subculture revolving around hairy guys) in his A DIRTY SHAME. The best segment is Green's Anne Frankenstein, which has a clever if tasteless premise (Anne Frank's family name was short for... Frankenstein!) and a stand-out performance by Joel David Moore ranting in gibberish (if he ever gets near an actual German word, it's an accident) as Hitler. The framing sequence and its zombie outbreak conclusion proves to be the least entertaining portion of the film, just another ho-hum take on a played-out subgenre that telegraphs most of it's punch-lines, none of which are that funny to begin with.
It should also be noted that if the goal of CHILLERAMA really was to recreate the drive-in films of the eras in question here, then it fails miserably. Again, Green's segment probably fares the best as it comes closest to the look and tone of a poverty row fifties/early sixties production. For the most part, though, the real inspiration for CHILLERAMA seems to be the Troma Films productions of the eighties, and other similar straight to video schlock from that decade. Considering the drive-in is named Kaufman, presumably after Troma studio head Lloyd Kaufman, I think I'm correct in this assessment. And with its emphasis on crude and politically incorrect humor, CHILLERAMA certainly plays better as Troma tribute than as an homage to the more innocent drive-in fare of earlier decades.
Like most anthology films, CHILLERAMA is a mixed bag, and that's to be expected. It would have been nice if at least one of these segments had really stood out as something special, but at least two (Rifkin's and Green's) are reasonably entertaining. No doubt I would have enjoyed this more in my teens and early twenties, back when gleefully offensive eighties and early nineties garbage like THE TOXIC AVENGER and PSYCHOS IN LOVE was a regular part of my cinematic diet. Nowadays, while I can still have some fun with a movie like this, I'm just thinking in the back of my head that I could and should be spending my movie viewing time more productively. 2 out of 4 stars.
Posted by Bob Ignizio at 12:01 AM