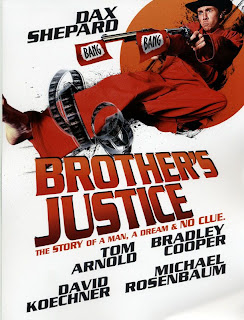 Even though meta-satire TV comedies like Curb Your Enthusiasm, The Larry Sanders Show, Entourage, Extras etc. have done the idea to death, BROTHER'S JUSTICE is another one of those mockumentary-type deals in which real-life movie-industry folk portray themselves, generally as ego-swollen jerkwads. Just kidding, right. Uh, right?
In a setup that seems to be a takeoff on Joaquin Phoenix's bizarre career turnabouts, comic actor Dax Shepard (Dax Shepard, portraying himself as a borderline racist/homophobe with a soupcon of substance-abuse issues) announces he's going to forsake funny business and become a dead-serious martial-arts action star, a la Chuck Norris, in something called "Brother's Justice." There isn't even a script, just a vague Dax-centric scenario pitch about drug-dealing biker gangs and a kidnapped brother. Shepard doesn't even know any martial-arts skills. But he bulldozes ahead with the thing and brings aboard his lifelong buddy Nate Tuck (Nate Tuck), normally a Kinko's manager, to produce. There's a funny between-the-lines subtext that Shepard's been mooching off Tuck in one form or another for ages, including pooling their finances to buy Shepard a cool car for a racetrack documentary that never got underway.
Dax and Nate schlep their concept around Hollywood, getting brushoffs from Jon Favreau and Bradley Cooper (and, in an amusing post-credit sequence, Seth Green). They have more "luck," of sorts, with Tom Arnold - who, via his role in TRUE LIES, promises to be a stepping-stone to James Cameron. Arnold here is a self-deprecating scene-stealer (turning in laugh-out-loud schtick even in the DVD extras), as another self-centered showbiz douchebag equal to Dax Shepard; Arnold keeps insisting he's young enough to play Shepard's brother in "Brother's Justice" rather than an uncle or pa. But meanwhile Shepard's relationship with Tuck begins to sour, especially when Dax bungles showing off
his karate moves on national TV.
Among the critics who dumped all over BROTHER’S JUSTICE on Rotten Tomatoes, one of them made a quoteworthy comment that it’s a vanity project spoofing a vanity project. Guilty as charged, but as a rental the 80-minute flick is still an okay rainy-day time passer for those in search of a Hollywood-insider goof, even if the message - that cinema types are a-holes who relentlessly use each other - is one we've heard before (and will likely hear again, being a good deal true). But I was decently amused much of the time. Shepard and Tuck bring it off briskly on an obviously DIY-miniscule budget, and Tom Arnold could make a sideline of sending up his own image, if only William Shatner would stop monopolizing the field. (2 1/2 out of 4 stars)
Posted by Charles Cassady Jr. at 12:01 AM