[BATMAN: YEAR ONE is now available on home video.]
Review by Bob Ignizio 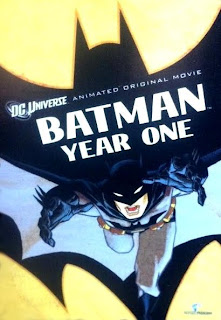 Just in time to provide an interesting counterpoint to writer Frank Miller's recent batshit crazy rants about Occupy Wallstreet and the Muslim Menace comes this adaptation of Miller's seminal Batman story arc BATMAN: YEAR ONE. Back when he was a little more liberal and more interested in telling a good story than spewing forth political diatribes, Miller wrote an expansion of the Dark Knight's origin story that made the character more contemporary and adult without sacrificing any of the things that make the character the iconic pop culture figure he is. That story has now been turned into an animated film, and it's about as good a comic book adaptation as one could hope for.


The film opens as Bruce Wayne (Ben McKenzie) is returning to Gotham after several years spent learning how to wage his war on crime. At the same time, police officer Jim Gordon (Bryan Cranston) is beginning his career with the Gotham police force and preparing for the birth of his first son. Neither man is truly prepared for what Gotham has to throw at them. There aren't any supervillains like The Joker or The Penguin to deal with yet (although we do see a little bit of an early Catwoman), but the inherent evil and corruption of the big city is more than enough to task these two unseasoned crime fighters.
The animation here is more realistic and a little more influenced by Japanese anime than the usual animated Batman films and TV shows produced by Bruce Timm, and that feels appropriate. And although there is no explicit sex or violence, this is definitely not a kiddie flick; BATMAN: YEAR ONE earns its PG-13 rating. I imagine that tone is why the producers opted for McKenzie to voice Batman instead of Kevin Conroy, who is most associated with the role from the less adult slanted BATMAN: THE ANIMATED SERIES. It's not that McKenzie is bad, but when I hear Batman in my head, I hear Conroy. Hell, I'd be happy if Christopher Nolan let Conroy dub Christian Bale's in-cowl dialogue for the live action Bat films. But that's a minor quibble, and the rest of the voice cast, which in addition to the always excellent Cranston includes Eliza Dushku, Jon Polito, Alex Rocco, and Katee Sackhoff, are top notch.
Unlike many comics creators (Alan Moore comes to mind most readily), Hollywood has done remarkably well by Miller. His SIN CITY and 300 were both turned into extremely faithful film adaptations, and whatever complaints one may have against either are generally inherent in the source material. Here once again Miller's work gets treated with reverence. In fact, if there's any complaint I have with BATMAN: YEAR ONE, it's that it might be a little too unwilling to expand upon Miller's tale, resulting in a rather slight running time of an hour and six minutes. A little more exploration of the characters to flesh this tale out would have made for a better, more cinematic film. That said, what we do have is very good, and I imagine most Batman fans, whether they've read the original comics this is based on or not, will enjoy the film. 3 out of 4 stars.
Posted by Bob Ignizio at 12:01 AM