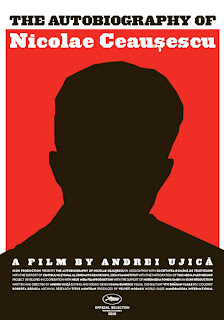 Watching THE AUTOBIOGRAPHY OF NICOLAE CEAUSESCU, I couldn't help but think of my Cleveland Movie Blog colleague Charles Cassady, Jr.'s recent review of another Romanian film, TALES FROM THE GOLDEN AGE. Charles is older than me, something I'm fond of pointing out, and therefore knows a little more about ancient history like the cold war. In his review of that other film, he pointed out how Romanian dictator Ceausescu was, despite being a communist despot, not entirely unpopular with the leaders of Western Democracy.


Charles' assertion is backed up in AUTOBIOGRAPHY as we see Ceausescu somehow manage to get along with almost everyone. Seeing Richard Nixon all smiles as he tours Romania, pledging the friendship of the United States at a time when we were supposedly locked in a struggle to the death with the Communist menace, is a bit of a surprise. Others in this documentary who appear to be on good terms with the Romanian leader include Jimmy Carter, the President of France, the Queen of England, Chairman Mao, and all the various Soviet leaders who came and went during Ceausescu's reign.
More impressive, Ceausescu apparently managed to maintain all these cordial relationships without kissing ass, even going so far as to take a strong stand against Communist nations interfering in each others' affairs and speaking out against the Russian invasion of Czechoslovakia during the Prague spring. Too bad for him that he lost touch with his own people. At least I'm assuming that's the case, as I don't imagine they would have executed him if he were as popular with the average Romanian as we was with all those world leaders.
The vast majority of this film presents Ceausescu in a positive light. It is, after all, billed as his “autobiography”, however dubious a distinction that may be, and who would tell their life story in a negative light? That is juxtaposed by the film clips which bookend the film, showing Ceausescu and his wife probably moments before their executions defiantly refusing to answer questions about their involvement in putting down a revolt in Timișoara, an act described by the offscreen questioner as genocide.
I get what director (or perhaps more aptly editor or complier) Andrei Ujica is trying to do here, contrasting the public persona of his subject with the reality of what the Romanian people endured under Ceausescu’s rule. The long, unedited home movie footage serves as an illustration of the same kind of “banality of evil” seen in similar films of Hitler enjoying his home life. The problem is, if you don't know the details of the dark side of Ceausescu’s time in power, you're left wondering why his people revolted against him. At the risk of having to perhaps come up with another title, including a little footage showing the negative side of life under the dictator's rule would have helped those like myself who weren't as well informed of the subject going in to the film.
For me personally, it also feels as if the film could have been better shaped and tightly edited. There's something to be said for simply letting the found footage unspool without comment or cut, but a lot of this just feels like bad vacation home movies. Again, I get it. It's that banality of evil thing. But the point could have been made just as well with a little less. In the end, I think the film will be of great interest to historians interested in this particular subject, but as a way to convey this information to a wider audience, I'm not sure how effective it will be. 2 1/2 out of 4 stars.
Posted by Bob Ignizio at 12:01 AM