[THE WHALE opens in Cleveland on Friday November 4th exclusively at The Capitol Theatre and Chagrin Cinemas.] 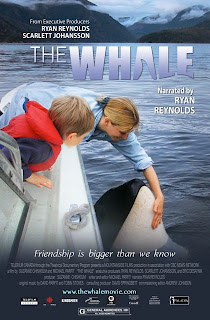 First know that at no point during the Canadian documentary THE WHALE does anyone utter the "f" word - FREE WILLY. It's virtually impossible now to discuss any cinema that involves orca whales without invoking Warner Brothers' 1993 cash (sea) cow hit, a crowd-pleaser about a captive killer whale yearning for its freedom with the help of a troubled human boy (and a catchy Michael Jackson theme song). In direct-to-video waters the FREE WILLY franchise is still harpooning the suckers with sequels; maybe poor Willy (now played by obvious animatrons) will get whored out to cross wakes with the girl surfers from the revived BLUE CRUSH next. Please, nobody claim that I seriously suggested that; Moammar Ghadafy got killed for less. My point is, THE WHALE never mentions FREE WILLY.


But if a logline for THE WHALE existed that did reference Willy, it would be this: Imagine if Willy didn't especially want to be "freed?" This was kind of the ongoing dilemma that faced the Canadian Fisheries ministry, beginning several years ago, when an errant baby orca somehow got separated from his pod off British Columbia. Ultimately nicknamed "Luna" by his friends, the juvenile (but still decent-sized) whale found his way to an inlet called Nootka Sound - where, instead of languishing or beaching himself, the creature surprised everyone by bonding closely with the human community, not unlike a playful, friendly stray dog.

The footage shot in and out of the water by husband-and-wife documentarians Michael Parfit and Suzanne Chisholm is precious, in all senses of the word. Luna the whale demands to be petted by cute kids and jovial adults; Luna the whale plays fetch with pieces of wood; Luna the whale earns the affection of the area timber industry by helping push their floating logs about (one lumberjack determines to call the beast Bruno, because `Luna' is too girlish); Luna picks up a hose in his titanic jaws and seemingly enjoys spraying the water about the docks.

So what's the problem? There are LOLcats, now there's a LOLorca for the YouTube fans. But Luna isn't a dog or a cat. He's a giant, toothy marine mammal, subject to Canadian laws. Fisheries bureaucrats and whale experts, no matter how sympathetic, promise that this constant interaction will all end tragically, for Luna and/or for some human, as the whale toys too closely with fragile kayaks, slashing propellers or, worst of all, the big pontoon-floats of seaplanes landing or taking off. Though there was initial hope that as he matures Luna (who frequently echo-sounds for company) would leave Nootka Sound of his own accord and join the rest of his species in the open ocean, he doesn't.

THE WHALE thus sort of morphs from nature documentary to a kind of true-life comedy of Canada's much debated (at least on AM radio in Cleveland) nanny-state government trying to deal with the situation as politely-but-firmly-but-eco-correct-feminist-progressive-and-probably-even-gay/lesbian/transgender-friendly-who-knows? a way as possible. Marine biologists and Fisheries reps (all-female at that) arrive in force to try "tough love" on Luna and de-habituate him from people. They also follow Luna fans with bullhorns threatening $1,000 fines for petting the attention-seeking whale. When that doesn't work, a more forceful solution is sought.

But in the meantime the native Indian tribe - already jamming on the thought that a late, beloved chief promised he would return to them as an orca - declare Luna a spiritual treasure to them, and they take to their canoes to interfere with the government's interference. Ultimately, even filmmakers Parfit and Chisholm declare they have to get involved and implement their own solution, but sadly they barely have the chance to.

All this is narrated quite splendidly by actor (and here, executive producer) Ryan Reynolds, who sounds quite humorous and into it, eschewing the Voice-of-God stuff (all due respect to Morgan Freeman). The ultimate lesson of THE WHALE - which is stated up front, not much of a spoiler - is the complication of humans trying to deal with an intelligent non-human. All the Hollywood movies (including ones Ryan "Green Lantern" Reynolds does) make it a space alien, for the mainstream-audience demographic. But this picture says that such E.T.s are really here, a lot closer to home and definitely not CGI. And it doesn't take any stock footage of whale hunting or captivity to remind most viewers that we're doing a not-so-great job at our end in understanding these creatures who share the planet with us (and are at least intelligent enough to not make SEX AND THE CITY II).

THE WHALE really is a warm, special film. Even with its bittersweet un-Hollywood finale and no easy answers to some of the questions it poses, in a better world this picture would make FREE WILLY bucks and captivate wide audiences the way BORN FREE did in 1966. (3 1/2 out of 4 stars)
Posted by Charles Cassady Jr. at 12:01 AM