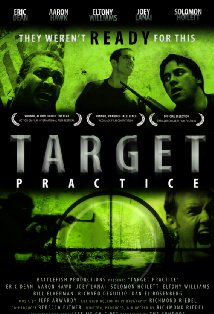 Domestic terrorists substitute for the usual rednecks and hillbillies in TARGET PRACTICE, a survival-action movie that takes the tried-and-true city slickers under attack in the woods premise of DELIVERANCE and gives it a post-9/11 spin. A group of old friends head off for a weekend fishing trip and what turns out to be a pretty tense ride. Dave (Bill Elverman) in particular no longer has the patience to put up with the racist tirades of Paul (Joey Lanai), and apparently everyone thinks that Mark (Eric Dean) is a loser. In general, whatever ties that once bound these guys together are fraying. Nearing their destination, the group spots an abandoned car on the side of the road and stops to investigate. They notice a bullet hole in the door, but don't have much time to think about how it got there before an unseen assailant opens fire on them, and their weekend getaway turns into a fight to survive.

Although obviously a low budget, shot on (high definition) video affair, TARGET PRACTICE comes across more polished and professional than you might expect. For starters, the entire cast is solid, never an easy feat for films at this budgetary level to pull off. The sound is professional, and aside from a few instances where the handheld camera shots get a little hyperactive, the cinematography is good, too. Most importantly for a film like this, the action scenes and stunts are reasonably well staged. If all you ever watch are Hollywood movies, even low budget ones, then you tend to take these sort of basic production values for granted. That's not necessarily the case in the underground independent film scene, though, and for getting those aspects right director/writer/producer Richmond Riedel deserves some credit.
Unfortunately, Riedel falls prey to the one thing that didn't cost him a dime: his screenplay. The plot is fine (at least until the end – more on that in a moment), but the dialogue is awkward and unnatural, and often drives home points that were made long ago. We don't need to be constantly reminded how much of a racist asshole Paul is; we got it the first 5 or 6 times he said something obnoxious. I can understand Paul having trust issues when two different African Americans claiming to be CIA agents (Solomon Hoilett and Eltony Williams) show up to seemingly offer their help, but there are more subtle and effective ways to convey that than by having Paul blatantly make racist remarks. But really, it's just the overall tin-eared quality of nearly every line any character speaks that kept on pulling me out of the movie. Maybe next time he writes a screenplay, Riedel might want to consider letting another writer do a polish on it or at least offer some suggestions.
Despite the dialogue problem, I was still pleasantly surprised by how watchable and genuinely gripping TARGET PRACTICE is for much of its running time. It's no masterpiece, but for a movie that seems to be aiming at about the level of seventies and early eighties drive-in action fodder, it more or less hits its mark. Then we get to the ending, which I guess is supposed to be a shocker. To me it just falls flat and undermines the attempts the film seemed to be making to show its main characters not just surviving, but growing from their experience. 2 out of 4 stars.
Posted by Bob Ignizio at 12:01 AM