[TALES FROM THE GOLDEN AGE screens Saturday November 26th at 9:05 p.m. and Sunday November 27th at 3:30 p.m. at the Cleveland Cinematheque.]
Review by Charles Cassady, Jr. 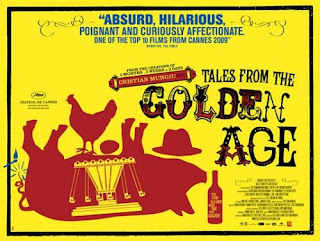 When Communism fell in Eastern Europe I told everyone (well...I told my imaginary friends, at least; nobody else listens) that we over here could soon expect a plethora of untold tales and revelations from behind the collapsed Iron Curtain. The 2009 omnibus feature from Romania TALES FROM THE GOLDEN AGE is one such bundle. It purports to be dramatizations of urban legends and tall-tale anecdotes of a generally subversive nature, circulated during the notorious regime of Nicolae Ceaucescu. That's the sales pitch, anyway (a remotely similar idea was done some years ago, a delight called VASKA EASEOFF, purportedly antics of a Russian trickster-figure borne of defiant folklore among prisoners in the gulags and labor camps).
As a few of you may remember, Ceaucescu and his and his wife were cornered and killed by their own comrade-citizens in an spontaneous uprising even shorter and more shocking than the end of Moamar Ghadafi. But take it from someone actually so old he can remember the Cold War (and now I watch as all the jobs go to youngsters who think the Cold War was that part where Saruman sent a bad snowstorm so that Bilbo and the Fellowship of the Ring couldn’t cross over the Mountains of Moriah) that Ceaucescu had a somewhat mixed fandom here in the West. Sure, he was a nasty Communist tyrant, but he was one of those Warsaw Pact "strongmen," like Tito of Yugoslavia, who wasn't 100 percent a Kremlin lackey. Under his rule Romania had its own agenda, its own against-the-Moscow-grain foreign policy and trade agreements (correct me if I'm wrong, but I think it had comparatively friendly relations with Israel). I even watched a UK TV documentary that predicted that if things ever came to a faceoff, Ceaucescu's military would engage the Soviet Red Army in combat rather than allow a Czechoslovakia-style invasion by the USSR.
Ah, the good old days, when we had that kind of stuff to worry about instead the banks here in the Free World seizing your home and cops pepper-spraying you at the Occupy protests. But anyway, try telling anything good about Ceaucescu to the Romanians. They've got their own outlook on the despot and the authoritarian culture he fostered, and such must be respected. TALES FROM THE GOLDEN AGE offers six short narratives from the absurdist climate, each with a different director but coordinated by writer and filmmaker Cristian Mungiu. In the first a village expecting a visit by a big Communist Party motorcade turns itself upside down to prevent the best possible face, obtaining a trophy herd of sheep, trying to find doves to release and canceling the community fete. But a large carousel-type ride erected for the fair is too large to take down, and it proves to be everyone's undoing.
In the second episode a master-and-apprentice team of official government photographers must repeatedly take up their Exacto knives and to retouch and re-retouch photos of Ceaucescu to make him look more flattering on the cover of the official Party newspaper coming out the next day, until, inevitably, an embarrassing blooper gets through. I'll bet half the kids watching this movie in University Circle will text-message each other: "WTF! Y DIDNT THEY FIX IT W/PHOTOSHOP?! WOULD HAVE TAKEN ME 2 MINS!" Siberia, that's where they deserve to be sent.
In the next tale a policeman and his family are delivered a contraband pig to eat and share with neighbors at Christmas time - but they did not expect the animal to come to them alive. They face the dilemma of how to slaughter the beast noiselessly in an urban high-rise apartment. No, it's not a bloody and gruesome episode, but if it makes vegetarians out of the audience all the better. Next comes an ironic bit about a persnickety teacher (and Larry-of-the-Three-Stooges lookalike) who bids to bring literacy to adults and children alike in a rural village. But he starts out teaching reading of warning labels, and the results are ironic indeed. The latter episodes concern a couple of con-artists, a teenage girl and a ne'er-do-well young man, who run a scam posing as government air-quality inspectors to obtain re-sellable bottles and jars. The closer similarly concerns a truck driver, charged with a valuable cargo of chickens to export, unsure how to best make use of the resulting unauthorized eggs he filches.
One notices as the tales go on, that they begin to lose their humorous edge (comical in a somewhat morose Eastern-European aspect anyway), and they start resembling tragicomic little Krzysztof Kieslowski vignettes of human foibles against a background of repression and subsistence-survival. The picture's no laff riot, believe me. And some of these filmmakers sure take their time getting to the point, making an anthology that's two-and-a-half hours long, not the brisk collection that most Hollywood portmanteau movies tend to be. I confess, I was looking at my watch a little before long.
You may be looking at your watch now too; my review is running wayyy over. Hey, you think you can sum up a rather involved feature composed of six different stories in Tweet-length, be my guest. I liked TALES FROM THE GOLDEN AGE, but a little less than I wanted to. Maybe seeing VASKA EASEOFF really spoiled me, or maybe a bit more tightening would have done the trick. Then again, all these stories work effectively on their terms, so you might say you're getting a Great Capitalist-Pig Recession special, half a dozen movies for the price of one. Kind of a glass half-empty/half-full deal there, just like how Ceaucescu was a tin-plated little dictator all right, but he wasn't Moscow's footstool of a tin-plated little dictator. Of course, to the average downtrodden comrade-citizen of Romania that distinction hardly seemed to matter. (2 1/2 out of 4 stars)
Posted by Charles Cassady Jr. at 12:01 AM