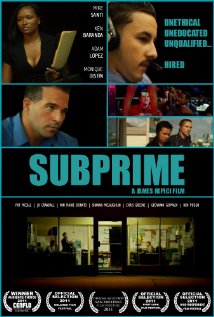 Wall Street doesn't deserve all the blame for America's financial woes. Someone had to sell those toxic mortgages that the big firms bundled together in the first place. For that, you don't want a banker; you want someone with even more flexible morals. Someone who can get down in the trenches of middle America and convince Grandma to take advantage of all that equity in her home. Someone willing to make false promises of low payments and fixed interest rates if that's what it takes to get a signature on the dotted line. In short, you need a salesman.


Although the particulars of its story are fiction, SUBPRIME more or less accurately depicts the sort of business practices, and the men of dubious morality willing to engage in them, that allowed so many bad loans to get on the books. Mike Banco (Mike Santi) runs Empire Funding, a small mortgage company in Florida. Banco has a “bible” of rules for doing business that he instills in all the people who work for him, including his newest employee David (Ken Baranda), a nice guy with a nice fiancee whose morals quickly become compromised when he realizes how much money he can make.
The film follow the course of David's career beginning in 2002. Along the way we meet some of the other brokers who teach him the tricks of the trade, like how to bribe appraisers and forge documents to make sure that loans go through no matter what. It's a fun ride on the way up, but when the bubble inevitably bursts, it's a long hard fall. By 2007 the end is clearly in sight for David, and unlike those Wall Street guys there's no golden parachute waiting for him.
SUBPRIME makes a fitting companion piece to the recently released MARGIN CALL, a film that dealt with the sexier, flashier Wall Street side of the financial crisis. It's perhaps fitting given its milieu that SUBPRIME is a grittier film with a cast of mostly unknowns. Apparently the budget was a mere $10,000, but director/co-writer James Repici has really made the most of what he had to work with. Production values are generally solid, and the movie only looks cheap when it means to. The film also flows very well, and while the running time is a bit short (an hour and seventeen minutes), it feels like anything more would have just been unnecessary padding. I could have done without the narration by the requisite washed up veteran salesman (Patrick A. McCall) – it feels just a bit too heavy handed, spelling out things we can easily discern from the onscreen narrative – but at worst it's only a minor annoyance.
As for the acting, it's a bit of a mixed bag. A few members of the supporting cast are stiff and most likely amateurs, but the lead actors are right on the money. I worked in the home improvement industry in various capacities for a little over a decade (thankfully no more), so I know the types. This may be a different business, but salesmen are salesmen, and Baranda and his cohorts each embody various different types that feel quite familiar to me. And in his performance as Banco, Santi conveys an attitude of internally justified amorality that I've witnessed on more than one occasion among sales managers.
If I were grading on a curve, I'd probably give this movie 3 out of 4 stars. Most of the films on this budgetary level that I've seen are little more than vanity projects or attempts to learn filmmaking on the job that the average person would turn off after five or ten minutes. By the same token, there are movies made for the price of a used car that do overcome their limitations and resonate with mainstream audiences (CLERKS and EL MARIACHI being two notable examples). SUBPRIME falls somewhere in the middle, though definitely more on the good side of that divide. The film does have a few rough edges that might be an issue for some viewers, but overall this is solid, professional work. Repici and his cast and crew did a good job here, and while I may not be able to give the finished product an unequivocal recommendation, I think those interested in the subject or who are fans of true independent cinema will find SUBPRIME worthy of their time and attention. 2 1/2 out of 4 stars.
Posted by Bob Ignizio at 12:01 AM