[THE SKIN I LIVE IN opens in Cleveland on Friday November 18th exclusively at the Cedar Lee Theatre.] 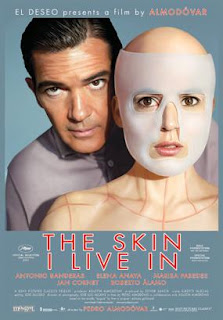 Inspired by Thierry Jonquet's novel Tarantula and Georges Franju's 1959 film EYES WITHOUT A FACE, this represents Pedro Almodóvar's first foray into horror territory. This shifting of genre, however, is not a complete stylistic transformation, but rather an extension of his cinematic inquiry into the same themes that have preoccupied the director for much of his career, including identity and desire, gender and corporeality. The dark mood of this film - though not without an element of comedic absurdity - constitutes the real departure from the majority of his previous work. While in the past somber subject matter was balanced with equal portions of humanity and humor, here the tone and texture convey a deeper malevolence. The skin this film inhabits is uncomfortable, alienating, nightmarish and cold. Of course, when concocting a psychological thriller, such an unsettling atmosphere should be regarded as a welcomed ingredient.


The film concerns Robert Ledgard (Antonio Banderas), a plastic surgeon who has successfully engineered transgenic flesh more durable than regular human skin (and which, due to its fire-resistance, might have prevented his wife's death twelve years prior). He lives behind stone ramparts in a gorgeous Spanish villa, complete with an operating room, laboratory, and a beautiful female subject named Vera Cruz (Elena Anaya). Vera is involuntarily held in the bedroom adjacent to Ledgard's own, where she is kept under constant surveillance for medical observation, suicide prevention, and... other reasons. The household is managed by the doctor's unusually faithful servant, Marilia (played by long-time Almodóvar co-conspirator, Marisa Paredes), until one day her estranged and deranged son Zeca (Roberto Álamo) arrives in a tiger costume to upset the peace in this not-so-quaint country estate.

Discussing more of THE SKIN I LIVE IN (La Piel Que Habito) without giving away too much of the plot is tricky. The story is structured in such a way that it forces us to continually re-evaluate the characters and their interactions as new pieces of the puzzle come together, gradually resolving the suspense to reveal something astonishingly demented, yet also richly evocative and thematically significant. Banderas plays the deeply troubled surgeon as though the sinister eyes of Dr. Moreau were staring out from behind the charming countenance of Cary Grant. His restrained performance tows the delicate line between repulsion and empathy, much like Almodóvar had previously sought with the character of Benigno (Javier Cámara) in TALK TO HER. Equal to Ledgard in nuance and complexity, Anaya captures Vera's ineffable struggle to become something more than a mere receptacle of desire, mutable in ways that surprise even the doctor himself. Both characters manage to subtly manifest the degraded humanity that still flickers within them.

Interestingly, the cinematography is not as noirish as the subject matter. The frames are filled with vivid colors instead of draped in shadowy gloom, conveying an unaffected creepiness that operates in the open, leaving you legitimately disturbed even as you grin from the narrative excesses. Often the camera becomes the sort of unabashed voyeur you might have found lurking about a Hitchcock set, leading the audience toward complicity in Dr. Ledgard's obsessions even before we fully understand exactly why he is obsessed.

Almodóvar's own longstanding fascination with transplants and transformations manifests in the idea of perfecting the human form through “transgenesis.” Such improvements as those championed by Dr. Ledgard are certainly possible and naturally fraught with murky ethics. Apart from the obvious promise of growing new and superior body parts, there remains something inherently frightening about contemplating this sort of human transcendence. Maybe it is the fear of engineering our own obsolescence, and thereby challenging the common conceit that humans embody the pinnacle of evolution. Or perhaps it is just the sheer audacity of it. Dr. Ledgard's Frankensteinian fervor suggests humanity's ability to save itself; a notion commonly embraced by madmen suffering from a deranged optimism in the face of permanent loss. Yet some such transformations seem inevitable, forcing us to redefine what being a human (man or woman) actually means, and how that relates to the skin we live in.

Opinions are bound to be mixed about the lurid contortions of this perverse tale, yet Almodóvar accrues interest by purchasing even the most fanciful plot twists with large notes of credibility backed by his refusal to traffic in winking irony. Never does he permit the viewer a reflective moment to disengage from the characters, resulting in a cinematic treat that lingers on the palette long after your eyes have left the screen. At its heart, this is a revenge story where the act of revenge is neither cathartic nor ironic, but instead leads somewhere else altogether. 3 1/2 out of 4 Stars.
Posted by Ben at 12:01 AM