"Randy Comes Home" to the Christmas Story House in Tremont 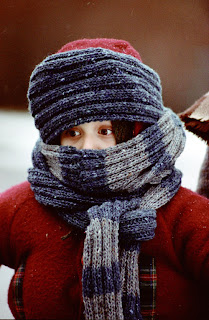 Now that LeBron James is gone, the only thing significant about Cleveland, as we all know, is the "Christmas Story House" in Tremont. A CHRISTMAS STORY, of course, is the cherished, non-formulaic 1983 family comedy directed by Bob Clark, starring Peter Billingsley, Darren McGavin and Melinda Dillon. Based on the writings of humorist Jean Shepherd, it evoked a 1940s Midwestern-boyhood Christmas, centered on young Ralphie Parker and his wintery memories of Ovaltine, leg lamps, school bullies, embarrassing bunny costumes and Ralphie's dogged pursuit of a genuine Red Ryder BB gun air rifle in the face of parental (even Santa) opposition.


The MGM/United Artists release premiered to lukewarm box office and even negative reviews ("This movie sucks! There are no slashers or Ewoks at all! Nobody will ever remember it! Hey, we don't exist yet!" - The Cleveland Movie Blog, 1983). But in TV airings and revivals on home video A CHRISTMAS STORY gradually morphed into an alterna-holiday classic, reverently quoted and revived and remarketed (including a revival as a stage comedy). Even though the material is set in Indiana, and much of the picture was shot in Canada, it was in Cleveland in 1982 that the film crew found a viable Midwest-flavor exterior shooting location (after some 20 other cities had turned them down) and a cooperative department store - Higbees, then still in operation on Public Square - boasting interior decor that hadn't changed over decades, for key scenes in which Ralphie tangles with an unfriendly St. Nick and elves. And, of course, a private home in the Tremont neighborhood, at 3159 W.11 St., became the exteriors of Ralphie's Indiana abode. For years people who loved the movie would navigate the tricky route to Tremont just to drive past and gawk at the genuine Ralphie Parker house.

In 2005 Brian Jones, a San Diego fan who had spun his love for A CHRISTMAS STORY into an internet business selling leg lamps, was told the actual "Christmas Story" home was for sale on eBay. Jones won the auction, with a $150,000 bid. In 2006 he opened the house to the public as a restored 1930s/1940s working-class abode in the Jean Shepherd tradition, in a gala with Cleveland City Councilmen and actors from the film present, plus a line of well-wishers stretching around the block. The Christmas Story House - and a museum/gift shop across the street - has drawn fans and pilgrims ever since, often with annual tie-ins and seasonal specials.

For the 2011 season the Christmas Story house is doing "Randy Comes Home," with guest actor Ian Petrella, who played Ralphie's younger brother Randy Parker. All grown up now, Petrella personally greets and guides visitors around the house and museum on selected days during November and December, telling stories about the making of the film and its legacy from his unique POV. Petrella's latest bulletins (via his "Randy Parker" FaceBook page) promise his presence on every day the House is open except most Saturdays and Sundays, Thanksgiving and Christmas, in November and December.

For more information and "Randy Comes Home" updates, go to www.achristmasstoryhouse.com or phone 216-298-4919.
Posted by Charles Cassady Jr. at 12:01 AM