[A LONELY PLACE TO DIE opens in Cleveland on Friday November 18th exclusively at the Capitol Theatre.]
Review by Bob Ignizio 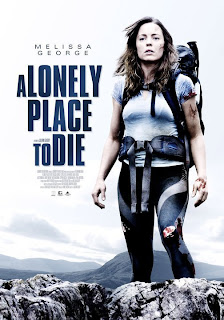 A group of friends set off for a fun weekend of hiking and climbing. While stopping for a rest, they hear a muffled voice and, upon investigation, discover the sounds are coming from a tube sticking out of the ground. A little digging reveals a young girl buried alive inside a wooden box, and as any decent human beings would, the hikers decide to help her. Being on top of a mountain in the middle of the woods, getting to the nearest town would be difficult enough. When someone starts shooting at the group, though, they quickly realize their good deed may well cost them their lives.


A LONELY PLACE TO DIE is a B-movie thriller, and co-writer/director Julian Gilbey does a fine job generating suspense and tension with a fair degree of style. His film covers all the mandatory genre bases, but also manages to avoid the most egregious cliches, and even has a few bits of clever misdirection that keep the audience on their toes. As Allison, Melissa George makes for a strong and capable protagonist even if the role doesn't give her much in the way of actual acting to do. Sure, the characters do some dumb things, and their emotional reactions don't always ring true, but that's par for the course in movies like this. The important thing is to pull viewers in and hold their attention well enough that most will be willing to gloss over the more ridiculous and far-fetched moments, and in that respect the movie succeeds.
Although in the States A LONELY PLACE TO DIE is getting only a limited release in specialty theaters, this is not some esoteric little arthouse film. Rather, this is a movie with mainstream appeal, the kind of well made thriller aimed at adults that I think a lot of people are wishing for when they say there are no good movies playing at theaters these days. Don't get me wrong, the movie is no materpiece, and I can't say it completely blew me away. Still, A LONELY PLACE TO DIE is certainly no worse (and is in most cases better) than most of the slick Hollywood thrillers that get to play thousands of multiplex screens only because they have a marketable star. 2 1/2 out of 4 stars
Posted by Bob Ignizio at 12:01 AM