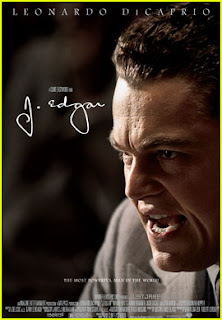 Bill Cosby came out with a children's book entitled The Day I Saw My Father Cry. I was afraid I was going to have to live through that when I reported back to my own dad and broke the news that Clint Eastwood, manliest man in movies...had directed a gay movie. Guys kissing, full on the lips. What does that make Clint, the Girly-Man With No Name? The Good, the Bad and the Ug-GLEE?

The film is J EDGAR, a biopic of the legendary FBI (that's still Federal Bureau of Investigations, as far as I know, homophobes) director J. Edgar Hoover. Hoover is seen by some as a hero who practically built this country's greatest law-enforcement organization (this is doubtless news to 21st-century schoolkids, I'm sure, who thought it was Batman, Superman and the Justice League). To others Hoover was a runty, paranoid zealot who compiled enemies lists and used surveillance and blackmail against the highest in the land (Kennedys especially) to keep his grip on power. Moreover, repeated rumors have claimed that the law-and-order icon, who never married, was a closet transvestite-homosexual.

I remember going on a high school field trip to Washington D.C. in which a guide around the FBI, a youngish fellow too, told us not to believe all the negative things we were hearing about J. Edgar, that the man was a giant. I’ve always wondered since what sort of fellow Hoover was to command such respect. In 1978, not long after Hoover's death, maverick moviemaker Larry Cohen did the little-seen THE PRIVATE FILES OF J.EDGAR HOOVER, with jowly TV cop actor Broderick Crawford as a thoroughly detestable FBI director. Now, in a bigger, super-deluxe telling, it's Oscar-winning director-composer Clint Eastwood at the helm. This is very much an only-Nixon-could-go-to-China deal, since Eastwood as a superstar firearm-toting, scowling action-hero in the 70s got called a fascist even more than J. Edgar Hoover did, at least before the critics finally decided the guy was a cinematic treasure (Eastwood, I mean).

J EDGAR has a time-hopping semi-flashback narrative, a gimmick that works beautifully on occasion. In the twilight of his half-century law-enforcement career J. Edgar Hoover (Leonardo DiCaprio, in and out of mummy makeup) dictates his self-aggrandizing memoirs to a young agent, describing how he joined the federal government in the 1920s when bomb-throwing anarchists had major cities in flames. Hoover's groundbreaking criminal-investigation ideas were as basic as getting fingerprints permanently on file and keeping crime scenes untainted. Yet such notions get him labeled as an eccentric and weirdo by bureaucrats. Faced with a Depression-hit public who make heroes out of gangsters and bank robbers, Hoover begins a propaganda campaign to instead put a positive spin on his "G-men" government-sanctioned crimefighters. Hoover's big break comes with the kidnap-murder of the baby of a national hero Charles Lindbergh, as Hoover's forensics teams and evidence-gatherers help build a case against the accused Bruno Hauptmann.

Of course, in other tellings of this and other Adventures-of-J.-Edgar-Hoover, we've been informed Hauptmann was either innocent or a low-level accomplice railroaded by the ambitious Hoover. I kept expecting Eastwood to rule on that and about a thousand or so other controversies. Was Hoover a power-mad little toad? Did he set up JFK for assassination, in cahoots with the Freemasons, the Scientologists, the Jews and Opus Dei? Was he the worst thing for the US Constitution since Homeland Security? Rather surprisingly, Eastwood sidesteps a lot of that for the big question: Wozzee gay!? Wozzee gay?!

Well, as Ellen DeGeneres said, yep. Or at least bisexual. Despite some early, formal and awkward attempts at courtship with the woman who would become his lifelong secretary (Naomi Watts) and a few other flings, it seems the love of Hoover's life was Clyde Tolson (Armie Hammer), a natty, unqualified job applicant at the early FBI whom Hoover nonetheless hires in an impulsive moment of man-crush-hood (oh is that what it it takes? Cleveland media has turned down my applications for decades. Guess I didn’t have the bedroom eyes). Hoover and Tolson vacation together in adjoining suites, go the races together, and have one heckuva lover's quarrel.

It's strongly intimated that Hoover's darker sides, like his obsessions with "loyalty" and subversion, had something to do with his personal relationships. When Hoover gets Martin Luther King and John F. Kennedy on audio tape in their respective bedroom interludes with mistresses (sorry, MLK worshippers, this seems to be historical fact), it's more like Hoover is indignant at the notion of marital infidelity and errant womanizing than anything else (and a recent book claimed the FBI, even after Hoover's blackmail tactics against King, was relentless in tracking down King's assassin James Earl Ray; Eastwood curiously omits this detail). J EDGAR's J. Edgar could be a pompous, controlling boyfriend, but he also stands by his man, lovingly nursing Clyde after the aging Tolson suffers a debilitating stroke.

Well, okie dokey, and Eastwood presents the man’s private moments in dignified, you wanna-make-anything-of-it? fashion. Still, what about the abuses of power? What about the hypocrisy of Hoover spying on the personal lives of others when his might be considered socially unacceptable? Was the Lindbergh case like Hoover’s 9/11, taking advantage of a crisis to further an undemocratic agenda? I never got a strong grasp of Eastwood’s Hoover above and beyond the domestic stuff, except the suggestion that however questionable J. Edgar might have been, a demonic-looking Richard Nixon and his gang were far worse.

On that note, I kept thinking of Oliver Stone’s NIXON, which manipulated facts like crazy and had an over-the-top operatic tone (and had Anthony Hopkins speaking in a strange, unplaceable accent not unlike the one DiCaprio uses here). But, like good New Journalism (if there is such a thing) NIXON did come up with an insightful and more or less sympathetic take on a similarly troubling DC strongman. I didn’t see that here. And if Nixon and Kissinger ever kissed, Oliver Stone kept that to himself.
Moreover Eastwood also shoots the whole movie in a drab, stone-gray color palette, the sort of thing you’d have expected him to save for Moscow in FIREFOX or one of his other old Cold War potboilers in which Clint kicked commie butt. The Clint Eastwood my dad watched.

My father actually didn’t break down and cry when I told him Clint Eastwood had finally done a big fat gay movie. Took the news stoically and in stride, in fact. Keep in mind my family has had to live with the shame of an eldest son who never got much farther in life than being a freelance movie critic, so their well of tears might have run dry ages go. (2 1/2 out of 4 stars)
Posted by Charles Cassady Jr. at 12:01 AM