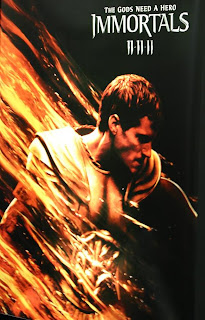 I knew I was going to have trouble with this one when, scouring my brain for worthwhile talking points, the best I could come up with was that I really like all the funny hats. Or maybe, given that IMMORTALS was directed by Tarsem Singh (THE CELL, THE FALL), king of epic scenery, big colors and costume design that makes Liberace look positively pallid, my headwear fixation is in the vicinity of the money. After all, you’re kidding yourself if you think this movie, which Tarsem himself likened to, “Caravaggio meets FIGHT CLUB,” is anything more than gloriously rendered spectacle honed into the vague shape of a bastardized BCE bedtime story.


Superficially, I understand why this film was marketed more as, “Hey, remember 300?” than, “Hey, remember THE CELL. No… You’re thinking of THE BONE COLLECTOR.” Beyond the pop culture recognizance factor, 300 has the same masculine posturing and a similar sinewy morass of pecs and abs being intermittently slowed to half speed and torn apart amid crimson-pixeled CG blood-spatter. Outside of the ticket-poaching advertising realm, though, Tarsem’s vision is IMMORTALS’ biggest selling point. And Greek mythology is the perfect sandbox for someone of his ostentatious leanings – It’s got straightforward plots, larger than life characters, and a stupid huge number of totally bughouse props, accessories, McGuffins and mayhem, which IMMORTALS throws together to create what amounts to epic Hellenic fanfic, starring the Grecian hero Theseus. In today’s installment, Theseus battles an evil king’s heathen army for control of a magic bow that can be used to unleash an imprisoned battalion of disgraced immortals from a mountain prison where they silently wait to overthrow the Olympian gods. Featuring: a whole lot of fetish masks and eyeliner.
Tarsem tells this story using a high contrast color palette and scenes that are rendered as stunning and painstakingly framed tableaus (he reportedly looked to Renaissance painting for storyboarding cues), with glitter-strewn, blood-drenched, armor-clad actors inhabiting spare, under-dressed sets that range from imposing man-made geometries to sparse, relentless naturescapes. Though not quite as impressive as his globe-trotting location filming in THE FALL, the physical scope of Tarsem’s Greece - colossal mountains, and plains so barren they’re practically lunar – dwarfs man and god alike. Additionally, every set of characters has a unique aesthetic, from an S&M Viking look for Hyperion’s army to Hijabs-by-Gaga attire for Oracles.
If only it were an exhibition piece and, you know, not a major motion picture.
Part of what makes IMMORTALS’ narrative so forgettable is that there are three main sets of characters -Theseus and his homies, Hyperion and his droogs, and the Olympian gods (best hats!) – but no attempts to really develop any of them individually, or even manage the structure of their comings and goings. We don’t follow Theseus so much as we default to him when no one else is actively advancing the plot through expositional dialogue or bloodletting. Sure, Henry Cavill (BLOOD CREEK), who plays Theseus, is affable and ripped enough to convincingly gladiate his way through 110 minutes of near-nonsensical heroism, but it’s a shame that that’s all that’s asked of him. Mickey Rourke, as King Hyperion, manages a relentless brutality that’s cartoonish enough to match his big ol’ lobster-claw hat… and, in this case, thank gods – a hint of nuance from the villain would only set up expectations that this film is not equipped to fulfill.
I generally dislike CG gore - flesh and blood should demonstrate enough on-screen weight and tactility that the viewer can relate the discorporate matter to the weight and consistency of his or her own viscera. But here… I didn’t mind it. Everything is so artistically rendered, ergo, representative, that the illusion of blood was no less convincing than a human portrayal of gods. Unfortunately, the pathos is just as synthetic. Ultimately, IMMORTALS isn’t topically compelling or dramatically complex enough to retain genuine momentum beyond the fifth or sixth throat-slitting, after which one’s attention reels and skids along a smear of blood, occasionally noting the pretty scenery zipping by. (2 out of 4 stars)
Posted by Matt Finley at 12:01 AM