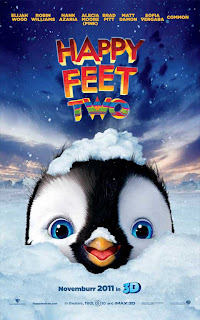 Mumble (Elijah Wood), the Emperor penguin with dance fever, is all grown up now and living in harmony (literally) with soul-singing mate Gloria (Pink) in the Antarctic.  Their hatchling, Erik (E.G. Daily), looks exactly like Mumble in the 2006 Academy Award-winning animated feature HAPPY FEET:  He’s a pint-sized bundle of fluff with ice-blue eyes and spunk aplenty.  But while his dad successfully compensated for an atrocious singing voice with his rhythmic two-step, Erik has stage fright and won’t sing or dance.  Not after being laughed at and called names by all of the other reind…er, penguins.  Erik finds a mentor in charismatic Sven (Hank Azaria), a pseudo-penguin who casts a televangelist’s spell on a neighboring enclave of penguin; he’s like King Julian, the fun-loving lemur from .  Only he can fly.

Mumble doesn’t think he can compete with this charming, colorful role model, but Erik sees a whole new side of his father when is suddenly cut off from the sea by icebergs, trapping his mom and the rest of the birdie brood.  Only Mumble and Erik (who weren’t home during the seismic event) can help, with possible assists from their flighty friend Sven. The jive-talking, macaroni-crested Lovelace (Robin Williams) also tags along, now sporting a Technicolor sweater instead of plastic refuse.  Time and weather are against them; the Emperors will starve if they can’t find a way out of the crevasse.
Meanwhile, Will and Bill the Krill (Brad Pitt and Matt Damon) discover there’s more to life than being whale lunch after an existential crisis prompts the ambiguously gay crustaceans to “swim against the swarm.”  Their near-microscopic aquatic adventure parallels that of Mumble and company while never truly intersecting with it—but gives returning director George Miller ( ) lots of opportunities for neat, alternate views of the principal action, wherein the 3-D magic really pays off.  One of the translucent orange-pink krill (it’s hard to differentiate between them) decides to buck the food chain and “go carnivore,” making for some funny sequences (imagine a shrimp trying to wrangle a leopard seal) and clever observations about natural selection, conformity, even institutionalized religion.  The less-spontaneous krill partner tries calming himself by quoting Wham and Rick Astley songs.
The Pitt-Damon dynamic sizzles, but smaller kids will probably miss the Darwinian / Descartian subtext of their krillian Odyssey.  That old proverb about the Chinese butterfly triggering a tsunami in the is re-imagined for the finale, at which point more than one character learns the value of individualism, and how “each step counts.”  Adele penguin Ramon (also voiced by Williams) pines after curvaceous Carmen (Sofia Vergara), but like Sven and the others he isn’t able to prove himself until the climatologic crisis.
HAPPY FEET TWO is crystalline sharp-looking (the “alien” humans are amazingly photorealistic) and boisterous, but wants for a proper villain.  King Skua and his evil horde of scavenger birds have a cameo, but a blizzard shoos them away in short order.  A tough-talking elephant seal named Brian (who sounds a lot like FINDING NEMO’s Bruce, the Great White Shark) learns a lesson in humility from Mumble without the two creatures ever really coming to blows.

In fact, a majority of the film concerns the penguins’ plight to escape their newly-minted prison of ice—which means there’s a lot of standing around doing nothing.  Rapper Common voices the father of a hip-hop hatchling, to whom he offers bytes of Eminem-flavored encouragement prefaced (perhaps unsurprisingly) with either “Yo” or “C’mon, y’all.”  Pink’s matriarch penguin suffers from the delusion that all problems can be solved by singing at them.  Her well-intentioned but protracted solo spot, “Bridge of Light,” will whitewash your kids’ attention spans in the snow—but the Brian May (Queen) guitar solo played by one of the human fishermen is choice.   2 out of 4 stars.
Posted by Peter M. Roche at 12:01 AM