Gainsbourg: A Heroic Life (December 2nd and 3rd at the Cleveland Cinematheque)

[GAINSBOURG: A HEROIC LIFE screens Friday December 2nd at 7:00 pm and Saturday December 3rd at 9:10 pm at the Cleveland Cinematheque.] 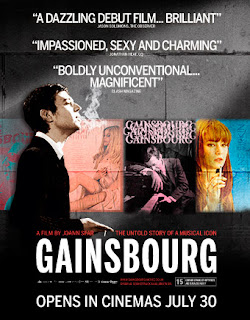 The subject of writer/director Joann Sfar's fantastical not-quite-a-biopic GAINSBOURG: A HEROIC LIFE is Serge Gainsbourg, an artist who led a life filled with more than enough drama to spin a movie out of. As a composer, his music spanned several decades and genres, and proved highly influential; moreso in Europe than the states, but influential nonetheless. He was also an actor, director, painter, and singer, achieving varying degrees of success in each pursuit.


Born Lucien Ginsburg in Paris in the year 1928, Gainsbourg (played by Eric Elmosnino) was capable of being ingratiating and likeable one minute, and a complete tool the next. Even in his art, he seems often to have been going for cheap shock value, but his talent was such that he often made something exceptional in spite of himself. He was also, to put it bluntly, a self-absorbed man-whore. Perhaps not everyone's idea of “heroic”, but in France where they have a higher regard for artists, as well as a higher tolerance for piggish behavior by men (witness the French response to the recent rape allegations against Domnique Strauss-Kahn), Gainsbourg makes for more likely hero material than he might here in the U.S..
Gainsbourg worked his way through one stunning beauty after another (including the iconic French beauty, Bridgette Bardot (Laetitia Casta )) with little regard for their feelings or appreciation of them as anything more than objects. At one point, Gainsbourg actually gets his first wife to drive him to a meeting with a woman he hopes to seduce, and then has her pick him up and take him home later. She's quietly fuming, but she does it. In the history of cads, there are few who could equal something like that, and as a guy I have to admit there's at least part of me that's impressed. But heroic? I don't know if that's the word I'd use.
Sfar isn't just fascinated with his subject's artistic and hedonistic sides, though. He seems to think the real heroism of Gainsbourg is in the way he overcomes the negative self image and feelings of racial inferiority instilled in him as a child. Gainsbourg's issues apparently stem from having grown up a Jew during the Nazi occupation of France, and early on he incorporated the Nazi propaganda cartoons depicting Jews as grotesque caricatures into his personal identity. This is represented on screen by a life-size puppet caricature of Gainsbourg with a huge nose, ratlike eyes, and long, claw-like fingers that often accompanies him and is essentially his id brought to life. It's a great visual conceit that also helps make clear the fact that Sfar's film is as much fantasty as fact.
Sfar is an artist himself who writes and draws comic books, aterm the author prefers to “graphic novel”, and like many artists he is more interested in arriving at emotional truths than getting all the little details right. This is perhaps best summed up in the quote from Sfar that comes at the end of the film: “Gainsbourg transcends reality. I much prefer his lies to his truths.” In addition to not worrying about the facts get in the way of a good story, Sfar also shows little concern for a smooth narrative structure, instead jumping from one vignette to another and expecting his audience to find their bearings.
Sfar's approach is certainly more interesting than what we usually get from Hollywood biopics, which just shoe-horn the lives of famous people into the same tired generic formula and with just as little regard for truth. That said, even Sfar falls prey to generic conventions in the latter half of his film. This section plays out like a surreal episode of Behind the Music with all the cliches that implies, and the striking visuals and Sfar's genuine passion for his subject can't completely keep the film from wearing out its welcome. Still, GAINSBOURG proves interesting enough to not only make me want to learn more about the work of its subject, but to look forward to future works from its director, as well. 3 out of 4 stars.
Posted by Bob Ignizio at 12:01 AM