Recently my wife felt in the mood for an October-ish suspense film and inserted into the aging DVD player something I'd been after her to watch for years, PERFECT STRANGER, from 2007. It is not remembered in the annals as one of star Halle Berry's (or director James Foley's) better outings by most high-paid critics out there. But PERFECT STRANGER holds a warm place in my memory. Before the picture opened wide, MGM and the local publicity agency were kind enough to actually bring Halle Berry back to her hometown of greater Cleveland, accompanied by co-star Giovanni Ribisi, for a red-carpet gala this-never-happens-here Hollywood-style advance screening in Valley View. This cinematic venue not only stands just around the corner from where we had recently bought the house (that ruined our lives), it was down the street from my wife's then-job at a decent local ad/PR agency (that didn't have the good sense to hire me). 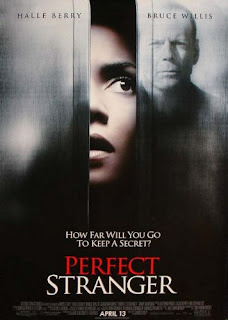 So this PERFECT STRANGER screening was a perfect storm of perfect perfection for us bright-eyed new homeowners. But it turned out my wife had a prior commitment that night. As the household's resident well-connected area freelance movie critic (my paper hadn't gone out of business yet) I had been looking forward to escorting my tall leggy spouse past the velvet ropes (yes, they had velvet ropes) to the elite press section, just like a true media power couple. But she couldn't make it. In consolation my wife set me up on a playdate with a fellow employee at her agency who expressed interest in going, a guy named Doug. So I took him out instead of my wife. You know something, though? The sex afterwards just wasn't the same. Rimshot! Wakka wakka wakka!
Actually it was appropos, given the essentials of the picture, to take some stranger from a Cleveland ad agency, especially an ad agency that had never even acknowledged my resume when I sent it in first thing in the morning (but called my wife to set up a job interview two minutes after she applied online, at something like 5:02 p.m.) to see PERFECT STRANGER. As the movie unreeled, with its depiction of seduction and duplicity and possible murder at a big NYC advertising firm, I kept bugging Doug with stage-whispered asides. "IS THIS WHAT'S IT'S LIKE IN YOUR OFFICE? IS THIS WHAT IT'S LIKE IN YOUR OFFICE, HUH, IS IT, HUH, HUH?"

Halle Berry portrays Rowena, a crusading reporter for a fictitious New York Post-lookalike taboid rag. After her big scoop against a sleazy conservative politician is squelched by the editors, she quits, only to be immediately buttonholed by a skanky old gal friend Grace (Nicki Aycox) who says she's got dirt on prominent New York advertising executive Harrison Hill (Bruce Willis), with whom she's had a torrid online and off-line affair. When Grace turns up gruesomely murdered, Rowena goes undercover, with the help of her platonic boy-pal and ace hacker accomplice (Giovanni Ribisi), landing a job at Hill's agency - such a big company, I do believe, one of the plot points is that they're angling for the Nike account - as a glamorous secretary, trying to get close to the boss-turned-homicide-suspect. Harrison Hill (I do loathe that character name; sounds like a superhero comics moniker, like J. Jonah Jameson's principle investor or something) seems to respond to Rowena's calculated flirtations - but if she gets too close to the truth, will she be the next victim?