Closed for the Season (now on video)

[CLOSED FOR THE SEASON is now available on home video.] 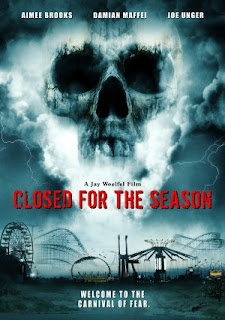 I've been on what passes for the Cleveland filmmaking scene long enough to know this sad fact, that everyone everywhere has, in some closet, a locally-made horror thriller - one just awaiting completion and/or delusional fantasies of a wide release...any...year...now. You'd be amazed how many people who ought to know better embark on such projects (and how many of them had scripts that involve Bigfoot). I think even I must have a made an unreleased horror film at some point. Something around here robbed me of my youth, savings and hope for the future, and those will do the job.


But one locally made horror film has gotten a fairly substantial DVD release - with the asterisk that writer-director Jay Woelfel left Ohio for the west coast and came back to shoot it with an assemblage of out-of-town talent, Bowling Green State interns (colleges are still in business? I hadn't noticed) and Medina County folks. The film was shot at the last moldering remnants of old Chippewa Lake Amusement Park, shuttered since 1978, before its demolition for development (other digital footage was shot at the still-existing Cuyahoga County Fairgrounds). CLOSED FOR THE SEASON is the title, and I have to say that as far as regional horror goes, I've seen plenty worse.

In fact, the flick serves double duty as a half horror, half eulogy to those closed-down funfairs of yesteryear: the Euclid Beach Parks, the Geauga Lakes, the Puritas Springs that have fostered a local cottage industry of nostalgia-soaked books and videos and occasional exhibits of their relics at grocery stores and street festivals. Personally I have no memory of Chippewa Lake Amusement Park; Geauga Lake/Seaworld was in my part of town, (and even so, I had homework most of the time anyway), but Woelfel obviously did. His feature, virtually without preamble, drops the viewer into weirdness in the dilapidated park of yesteryear, whose skeletal roller coaster and falling-down banquet hall slowly moulder behind a chain-link gate. Kristy (Aimee Brooks) just sort of wanders into the soon-to-be demolished ruin, remembering that she lost a toy teddy bear in there. She is terrorized by weird apparitions - like a CREATURE FROM THE BLACK LAGOON style "lake monster" - inspired by long-ago legends and rumors about Chippewa Lake (there's an old one about gangsters burying their victims under the rides, and my historical research uncovered similar urban legends about Cedar Point).

In a panic she runs to wake up local guy James (Damian Maffei), who turns out to be her secret admirer from long ago. Together they confront the enigmas of the park, which won't release them unless they experience all the defunct "attractions." The depopulated place seems more or less ring-leadered by "the Carny" (veteran actor Joe Unger is a guy whose face you've seen and voice you've heard plenty of times, you just didn't know the name), a trickster-figure who may (or may not) be the ghost of Chippewa Lake's tragic last carnival barker and who appears in various guises, even after Kristy apparently kills him. Kristy and James also witness each other getting killed, numerous times.

As the synopsis suggests, there isn't much surface sense to CLOSED FOR THE SEASON; amazing this script wasn't, in a previous incarnation, one of the assorted direct-to-video ALICE IN WONDERLAND knockoffs that proliferated in time for the Tim Burton blockbuster. Early on, at least Kristy proposes that the park itself is the spirit that's tormenting them, because the place is lonesome for the people who used to frequent it. A lesser potboiler would have served that one up as the big "surprise" ending, so kudos here for cutting right to the chase. Even so, at 114 minutes CLOSED FOR THE SEASON is overly long; it might have done better to end after the funhouse bit.

Oh, there's no Bigfoot. There's also no explicit sex, no nudity and hardly any serious swearing, and the gore is more sideshow-phony than disturbing (truthfully I'm sick of torture porn raising the bar on that one). What there is, horror fans, is the sort of "rubber reality" sensation that some of the slightly upscale chillers indulge in (the most famous perhaps being the original PHANTASM) in which a dreamlike quality and nightmare logic pervades from the first frame to the last, and you really never know quite where you stand. Watching CLOSED FOR THE SEASON I was reminded of something Roger Ebert wrote about a forgotten shock-schlocker called FEAR DOT COM with B&W fever-dream interludes, that if this weren't genre exploitation for the kids but something a German Expressionist made in the 1920s, it would be required film-school viewing. Sort of the same struck me about CLOSED FOR THE SEASON. Even with a national DVD rollout, the world outside Medina County/Chippewa Lake completists may little note nor long remember Jay Woelfel's effort. Jean Cocteau or Maya Deren did this same sort of rubber-reality ambiance, only theirs were "art" films and were praised to the heavens. Carry on, Mr. Woelfel, and don't let the critic bastards like me (or amusement-park destroying real-estate developers) grind you down too much.

For Chippewa Lake completists the DVD extras include great behind-the-scenes stuff, including a 1993 video walk-through by one aspiring impresario who was looking into re-opening the whole place, only to find it decayed beyond his finances to compensate, alas. (2 out of 4 stars)
Posted by Charles Cassady Jr. at 12:01 AM