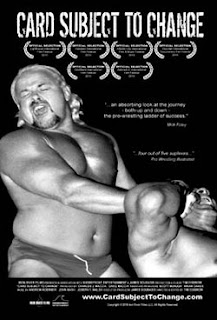 For most folks, the excellent 1999 documentary BEYOND THE MAT is probably as much as they'll ever want or need in the way of movies that look behind the scenes of the world of professional wrestling. For the rest of us, there's CARD SUBJECT TO CHANGE. Arguably the most compelling portion of BEYOND was the segment on one-time superstar Jake “The Snake” Roberts, now reduced to wrestling in low rent independent promotions. CARD SUBJECT TO CHANGE is an entire hour and a half devoted to that decidedly unglamorous side of wrestling where those on their way up, those on their way down, and those destined either to get out quick or stay trapped in this sports entertainment purgatory face off in VFW Halls and other improvised “arenas” in small towns across America.


Johnny Falco runs one of these smaller promotions, dubbed National Wrestling Superstars. Falco's events are the focus for much of CARD SUBJECT TO CHANGE, and through him we gain insight into just how small and hands-on these kind of operations are. To give you some idea just how hands-on, Falco actually hangs posters for his events at local businesses. It's been a long time since Vince McMahaon had to do anything like that, if ever.
All kinds of wrestlers work for Falco; some are regular jobbers, others are just passing through and picking up a quick paycheck. Among those we meet are a few past-their-prime superstars like Kevin Sullivan and Kamala the Ugandan Giant (in reality a truck driver from Mississippi with a few R&B albums under his ample belt) as well as up and comers like Trent Acid and third generation wrestler Lacey Von Erich. Not all of those interviewed live to see the finished film.
CARD SUBJECT TO CHANGE doesn't explore its subjects with the same kind of depth and emotional resonance found in BEYOND THE MAT, making it undeniably the lesser of the two films. Lesser doesn't have to mean bad, though. There's still plenty of interest here, especially for wresting fans. Everyone else is directed to see BEYOND THE MAT first. If they find they still have an appetite for more after that, CARD SUBJECT TO CHANGE should do the trick. 2 1/2 out of 4 stars.
Posted by Bob Ignizio at 12:01 AM